Then-Lieutenant Wales intervened to prevent a gay trooper from getting beaten by a gang of thugs. 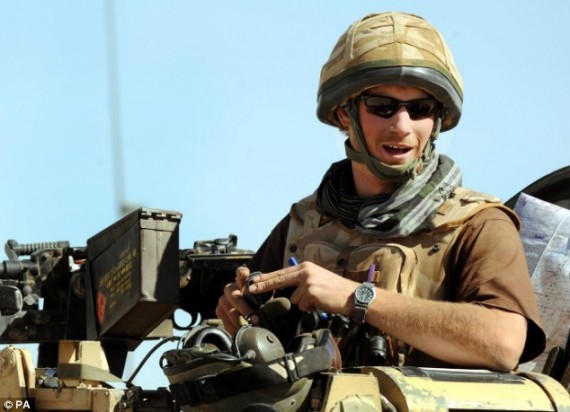 Then-Lieutenant Wales intervened to prevent a gay trooper from getting beaten by a gang of thugs.

A gay soldier told last night how Prince Harry bravely rescued him from a terrifying homophobic attack by squaddies from a rival regiment.

The Prince stepped in to save Trooper James Wharton after he was confronted by six soldiers threatening to ‘batter’ him.

Trooper Wharton fled to find Harry – who was his tank commander – and tearfully told the Prince what had happened.

‘I told him, “I think I’m going to be murdered by the infantry.” I climbed into the turret and talked Harry through exactly what had happened. He had a complete look of bewilderment on his face.

‘I couldn’t stop the tears from welling up in my eyes. He said, “Right I’m going to sort this s*** out once and for all.”

‘He climbed out of the tank and I poked my head out of  the turret a few moments later to see him having a go,’ Wharton said.

Harry, a Troop Commander in the Blues and Royals, confronted the tormentors, warning them they would face severe discipline if they continued their violent threats.

‘I could see he wasn’t holding back,’ said Wharton, who was 21 at the time.

After taking on the gang, Harry briefed a senior officer before returning to assure Wharton the situation had been ‘sorted’.

The soldier, who quit the Army earlier this year, said: ‘I will always be grateful to Harry and I will never forget what happened. Until he went over and dealt with everything I was on track for a battering.’

Pretty much what you’d expect an officer to do in that situation.

More on the State Trooper, Ambulance