Four U.S. citizens on a yacht hijacked by Somali pirates last week are dead. American military have killed the pirates. 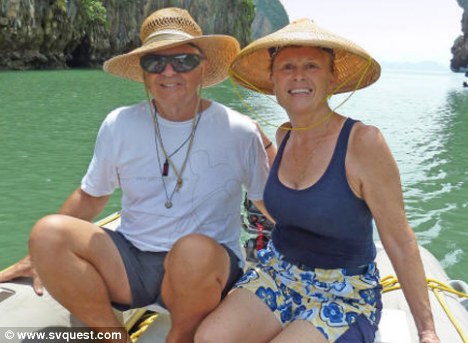 Four Americans captured by Somali pirates while sailing in the Indian Ocean have been shot and killed, NBC News reported Tuesday.

The two couples, Phyllis Macay, 59, and Robert Riggle, 67, of Seattle, and the yacht’s owners Jean and Scott Adam of California were on an around-the-world sailing trip when they were captured by pirates Friday.

Military officials told NBC News that about 1 a.m. ET shots were heard aboard the yacht. Negotigations had been under way with the pirates at the time.

The officials said U.S. military personnel boarded the yacht and discovered all four hostages had been shot by their captors.

The officials added that two pirates were killed and 13 others captured after a brief gun battle.

Four American sailors hijacked by Somali pirates off the coast of Oman have been killed, US defence officials say.

The US military said its forces trailing the vessel had responded to gunfire heard aboard but found all the captives shot when they arrived.

The yacht S/V Quest, hijacked on Friday, was owned and sailed by Scott and Jean Adam of California.

In a statement, US Central Command said that negotiations were underway between the US Navy and the pirates, when the US forces heard gunfire coming from the Quest about 0600GMT.

They boarded the ship, killing two pirates in the process, and discovered the four Americans shot. The US Navy sailors attempted to provide first aid but the hostages died, the military said.

“As they responded to the gunfire, reaching and boarding the Quest, the forces discovered all four hostages had been shot by their captors,” Gen James Mattis of US Central Command Commander said in a statement.

“We express our deepest condolences for the innocent lives callously lost aboard the Quest,” the statement added.

The US Navy captured 13 pirates, and found the remains of two other pirates already dead about the vessel, the US military said.

This will step up pressure on the U.S. government to do more to combat this scourge. It’s not at all clear, however, that much more can be done.