Dan Riehl is in the cross-fire between Alan Colmes and MEDIAite over a rather bizarre argument:

I’m not sure I quite understand this, given that cost is so important as a burden to taxpayers when it comes to health care. If Democrats want so badly to abort babies because of it, why are we bothering with someone who has a broken neck and back at 69? It sounds to me like she’s pretty well used up and has probably been living off the taxpayers for plenty of years to begin with. Aren’t we at least going to get a vote on it?

He’s talking about Harry Reid’s wife, who was injured, along with their daughter, in a car accident last week. He continues:

Come on, Harry – do your civic duty. The nation’s broke and counting on you guy. Pull the plug and get back to work. And don’t bill us for a full day today, either. This is no time to be sloughing off. Air freight her home, you can bury her during recess on your own time and dime. Or are you going to bill us for that, too?

Now, aside from it being poor form to try to score cheap political points off the suffering of politicians’ families — Lara Reid isn’t the Senate Majority leader — the argument doesn’t even make sense on its face.  While I oppose the current health care reform plan, Reid and company are trying to extend care, not limit it.   For that matter, while I’m passionately against abortion in all but the most extreme cases, who’s arguing that it should be performed more often so that we can save money?  Certainly, not any Democrats I know.

What are Democratic leaders saying?“If you pass the Stupak amendment, more children will be born, and therefore it will cost us millions more. That’s one of the arguments I’ve been hearing,”Stupak says. “Money is their hang-up. Is this how we now value life in America? If money is the issue — come on, we can find room in the budget. This is life we’re talking about.”

I don’t know Bart Stupak well enough to dismiss this as a damnable lie.  So, I’ll give him the benefit of the doubt that maybe someone who is technically a “Democratic leader” said something remotely like that.  Or that he honestly misunderstood someone as saying that.  Regardless, it’s a ridiculous distraction from the real debate: It’s not a significant reason why Democrats support either health care reform or abortion.

In an update, Dan links to a post by Rob Port titled, “Rep. Stupak: Pro-Choice Democrats Say Abortion Funding Needed To Keep Too Many Kids From Being Born” which in turn links to an older post titled “Pelosi: Free Condoms And Food Stamps Better For Economy Than Tax Cuts.”

STEPHANOPOULOS: Hundreds of millions of dollars to expand family-planning services. How is that stimulus?

PELOSI: Well, the family-planning services reduce cost. They reduce cost. The states are in terrible fiscal budget crises now, and part of what we do for children’s health, education and some of those elements are to help the states meet their financial needs. One of those—one of the initiatives you mentioned, the contraception, will reduce costs to the states and to the federal government.

Condoms reduce births and so do abortions.  So, since Pelosi supports giving out free condoms to reduce births, she obviously wants to encourage more abortions!  To save money!  QED. 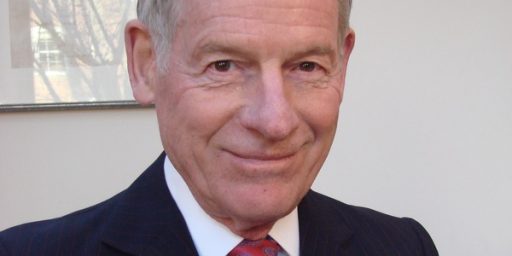