Coca cultivation is down in Colombia! But guess what is true about Peru?

About a week ago I noticed the following headline, which I meant to blog but never go around to, via the AFP:  Colombia halves cocaine production capacity: US

Colombia’s capacity to produce cocaine fell by more than half in the past decade, according to the office of the US drug czar Thursday.

“There has been a sharp decrease in the amount of pure cocaine produced in Colombia… from an estimated 700 metric tons potential cocaine production in 2001 to 300 metric tons in 2010… a 57 percent drop,” said a statement from the office of Gil Kerlikowske.

Ninety-five percent of cocaine consumed in the United States comes from Colombia.

My immediate reaction was that we would soon find out at least one of the following:

1)  That cultivation would have grown in Peru and/or,

2)  That there was unaccounted migration of cultivation within Colombia (i.e., that the estimates were wrong because cultivators had found new places to grow within Colombia).

Well, what do I see a few minutes ago?

Peru’s production of coca, the plant used to make cocaine, has risen for a fifth straight year, putting pressure on incoming President Ollanta Humala to step up eradication efforts he has criticized.

A study by the United Nations published today shows that Peru now rivals Colombia as the world’s largest producer of cocaine after land dedicated to illegal coca production rose 2.2 percent to 61,200 hectares in 2010. Cultivation in Colombia, which receives $500 million a year in U.S. anti-narcotics aid, fell 15 percent to 62,000 hectares, according to the study based on satellite tracking by the UN Office on Drugs and Crime.

Speaking of patterns, the response from Washington will likely be a push for additional funds to be spent in Peru (lots of funds, in fact).  And then, in about a decade or so, I can write a post about how coca cultivation in down in Peru….and back up in Colombia.

The War on Drugs is the gift that keeps on giving, to be sure.

You can see the trend in the following graph, which tracks cultivation from 1987 to 2006.  Yes, it is a bit out of date, but it is one I had handy, plus the point I want to make requires looking at the 80s, 90s and early 2000s.  What we see is that Peru used to be the major source for coca leaf, but after increased pressure on that cultivation, it was eventually pushed in Colombia (note, too, that the general overall level of cultivation remained relatively steady in a given range).

As noted above, at the time the Drug Warriors proclaimed the effort in Peru a grand success.  Never mind that it had no significant effect on the overall cocaine market. 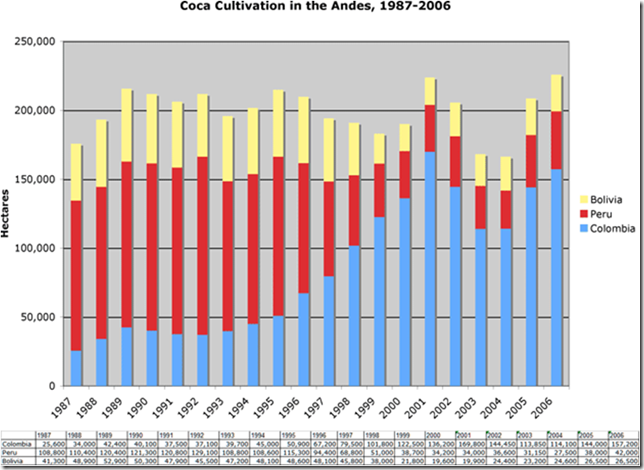