From the Department of What The Hell Were They Thinking, I present Air Force Chief of Staff Mark Welsh's new ceremonial uniform:

From the Department of What The Hell Were They Thinking, I present Air Force Chief of Staff Mark Welsh’s new ceremonial uniform: 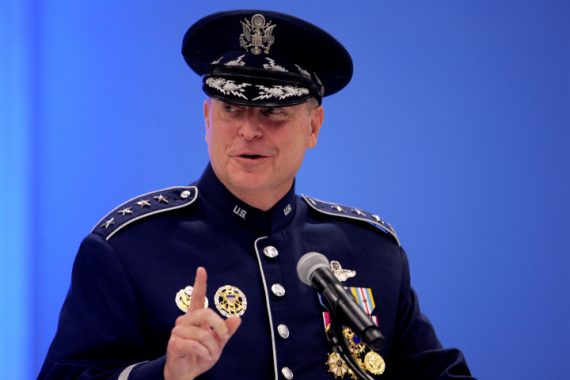 The amount of discussion you get on various military topics depends on how many folks are “read into” – aware of, and knowledgeable (usually) about – any given program or subject.

That’s why you hear so little debate on the Pentagon’s nuclear war-fighting plans, and so much about military uniforms.

The Air Force is the latest service to get its silver braid wrapped around the axle. It seems the new Air Force chief of staff, General Mark Welsh, rolled out a new ceremonial uniform recently, and return fire from the readers of Air Force Magazine hasn’t been kind.

“Ditch the zoot suit,” one reader wrote in the magazine’s just-published December issue. “General Welsh looks like a Russian crown prince at an embassy ball. What is it? Come on, General LeMay would never wear that!!”

“It appears the general is or was a member of the Air Force Band,” another opined. “Thank God I retired in 1981 as a lieutenant colonel.”

Indeed, there are few matters that get military members and veterans more riled up than changes to the uniform. Eric Shinseki is still viewed as History’s Greatest Monster by many for the temerity to take the black beret that Army Rangers had worn for years and make it standard issue for every soldier, evenly lowly REMFs. Merrill McPeak’s strange Air Force uniforms of a couple decades back, which were essentially business suits with medals affixed, went away right after McPeak did. And the Navy’s new Smurf-inspired cammo pattern—which isn’t designed to camouflage anything except grease spots–is a source of never-ending mirth.