The Army is ending its exclusive contract with Halliburton after years of cost overruns, according to a front page story in today’s WaPo.

The Army is discontinuing a controversial multibillion-dollar deal with oil services giant Halliburton Co. to provide logistical support to U.S. troops worldwide, a decision that could cut deeply into the firm’s dominance of government contracting in Iraq. The choice comes after several years of attacks from critics who saw the contract as a symbol of politically connected corporations profiteering on the war.

Under the deal, Halliburton had exclusive rights to provide the military with a wide range of work that included keeping soldiers around the world fed, sheltered and in communication with friends and family back home. Government audits turned up more than $1 billion in questionable costs. Whistle-blowers told how the company charged $45 per case of soda, double-billed on meals and allowed troops to bathe in contaminated water.

Halliburton officials have denied the allegations strenuously. Army officials yesterday defended the company’s performance but also acknowledged that reliance on a single contractor left the government vulnerable. The Pentagon’s new plan will split the work among three companies, to be chosen this fall, with a fourth firm hired to help monitor the performance of the other three. Halliburton will be eligible to bid on the work.

Wikipedia reports that “An audit of KBR by The Pentagon’s Defense Contract Audit Agency (DCAA) found $108 million in “questioned costs” and, as of mid-March 2005, said they still had ‘major’ unresolved issues with Halliburton.” I’m not well enough versed in large scale service support contracts to know whether overruns of $108 million in an $18 billion contract are par for the course or unusual, although my instincts tell me the former is more likely.

According to Wikipedia’s Halliburton entry,

The company’s contracts in Iraq are expected to have generated more than $13 billion in sales by the time they start to expire in 2006, but most offer low margins — less than 2% on average in 2003 and just 1.4% this year for the logistics work making these contracts less profitable than Halliburton’s core energy business. The contracts in Iraq will be more profitable after the US Army reimburses them for costs that were originally investigated as potentially inflated. [3]

The footnote goes to a CNN Money article no longer at the link. My experience with government accounting is that it can be rather sloppy in the particulars even when the overall numbers balance. So, it’s entirely plausible to me that KBR “overcharged” for sodas and made it up elsewhere on the huge contract. Certainly, margins much smaller than your local drug store don’t send up any red flags that the taxpayer is being bilked.

Regardless, it’s not entirely clear to me why the Army would be more efficient at monitoring multiple small contracts vice one giant one.

Further, the constant refrain that Halliburton is “politically connected,” presumably owing to the fact that the Vice President’s previous job was as their CEO, and therefore under less scrutiny is unwarranted. Certainly, they’re influential owing to their size and history. Halliburton has been supplying these services to the government since Dick Cheney was in grad school. Indeed, its KBR subsidiary was part of “a consortium of four companies that built about eighty-five per cent of the infrastructure needed by the Army during the Vietnam War [Wikipedia, KBR].” They’ve been the go-to contractor for wars big and small ever since, regardless of what party’s in the White House. (Hint: Lyndon Johnson was a Democrat.) 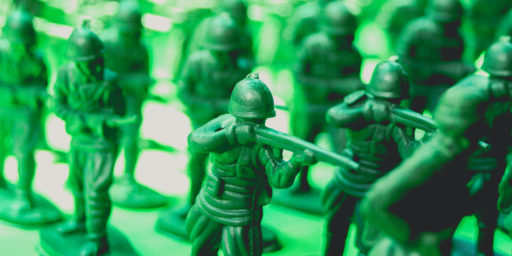