Babies With Pets in Home Healthier

Babies who grow up with dogs and cats in the home are healthier, a new study finds. 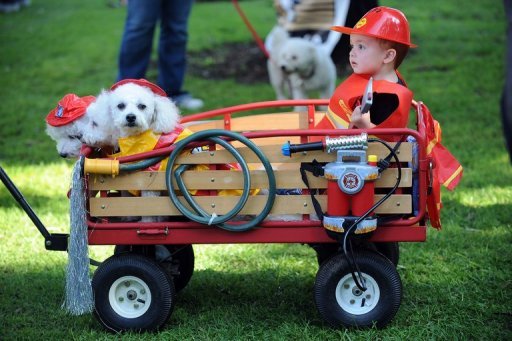 Babies who grow up with dogs and cats in the home are healthier, a new study finds.

AFP (“Dogs may protect babies from some infections: study“):

Babies who spend time around pet dogs have fewer ear infections and respiratory ailments than those whose homes are animal-free, said a study released on Monday.

The study, published in the US journal Pediatrics, did not say why but suggested that being around a dog that spends at least part of its day outdoors may boost a child’s immune system in the first year of life.

Cats, too, seemed to convey some protection to babies, though the effect observed was weaker than with dogs.

The research was based on 397 children in Finland whose parents made diary entries each week recording the state of their child’s health during the infant’s first year, from nine weeks to 52 weeks of age.

Overall, babies in homes with cats or dogs were about 30 percent less likely to have respiratory infectious symptoms — which included cough, wheezing, rhinitis (stuffy or runny nose) and fever — and about half as likely to get ear infections.

“If children had dog or cat contacts at home, they were significantly healthier during the study period,” said the study led by experts at Kuopio University Hospital in Finland.

The most protective association was seen in children who had a dog inside at home for up to six hours a day, compared to children who did not have any dogs or who had dogs that were always outside.

This stands to reason. There’s mounting evidence that today’s kids, who lead much more sheltered and antiseptic lives than those who came up even a generation ago, are less healthy. Early exposure to germs and allergens, in moderation, is a good thing.