Former New York Police Commissioner Bernard Kerik is the likely choice to head the federal Homeland Security Department during President George W. Bush’s second term, according to sources close to Homeland Security officials. Kerik would replace Tom Ridge, the first head of the department, who on Tuesday announced his intention to resign once a successor is in place. Kerik, 49, served as police commissioner for 16 months during 2000 and 2001 and gained national prominence during the Sept. 11 terrorist attacks. He previously was city corrections commissioner. After leaving the police post, he undertook a mission for the Bush administration to help train Iraqi police. He earned his spurs as a Bush political loyalist by delivering a prime-time speech praising the president during the Republican convention and campaigning for him in the fall.

Speculation about a move to Washington increased recently when Kerik sold $5-million worth of stock in Taser, the stun-gun manufacturer. The White House declined to comment on the appointment last night.

Gov. George Pataki sang Kerik’s praises during remarks delivered yesterday at the World Trade Center. “Look at his record,” Pataki said. “Look at his experience. He knows this country. And not only does he have tremendous experience leading New York in one of our most difficult times, he’s also been involved in Iraq and in other global issues. So I think he’d be terrific.” Rep. Peter King (R-Seaford) also praised Kerik, saying he “would be a terrific choice, great for the country and great for New York. He has the organizational skills as commissioner of the largest police force in the country and the street smarts of a tough New York City cop.”

Kerik isn’t a household name but would actually be a stellar choice. Aside from a huge name like Rudy Guiliani or Joe Lieberman, it would be harder to come up with a bolder nominee.

Why Bernard Kerik is Qualified 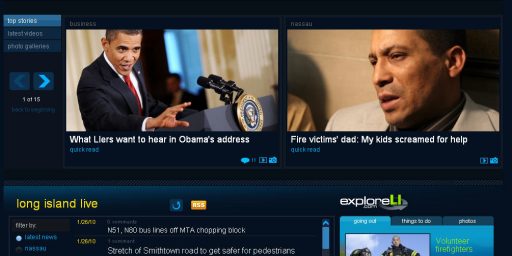