The Razor’s Edge Edition OTB Caption ContestTM is now over. 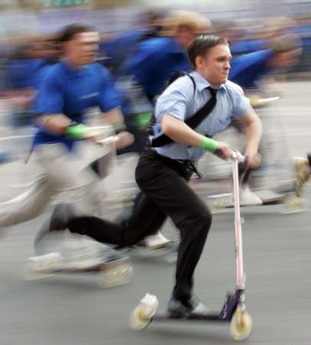 Second: charles austin – Ben Rothleisberger adopts a marginally safer mode of transportation, though perhaps a helmet would still be a good idea.

Bithead – The Al Gore campaign announced today that it will only be using alternative transportation, giving up their jetting from place to place, while preaching environmentalism. (Hey, we DID say it was a fantasy, right?)

Adjustah – The race is on to replace Bill Gates.

FormerHostage – It sucks, only having 15 minutes for lunch!

Michael A – A glimpse of the morning commute undertaken by lawyers and paralegals defending Lewis I. “Scooter” Libby.

FreakyBoy – The unexpected news that Kevin announced the winners to a Wizbang’s Caption Contest on time, causes a captioning-nerd riot to stampede to the nearest free wireless hotspot.

What happens after the internet has been down for 5 minutes.

Back to the Suture: A documentary on the increase of ER admissions due to razor accidents

By the time The Fast and The Furious XXIII – Scooter Libby razors Kiev was released the series had lost its luster.

The Monday contest has already received a RED CARD for use of hands.

Riding Sun is the low rider