The That’s Some Pig Edition OTB Caption ContestTM is now over. 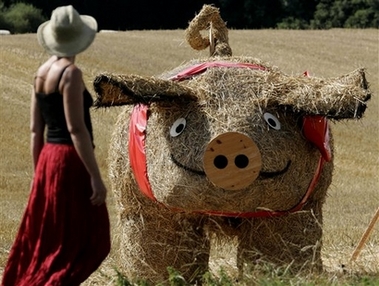 Second: yetanotherjohn – An Israeli farmer near the Lebanese border is shown with the only defense allowed under the latest UN resolution.

KEn – Cited as being offensive to Muslims everywhere, the artist was threatened with death if he didn’t remove the offending “art” immediately. (Oh wait, is the idea to caption it with something that wouldn’t happen?)

yetanotherjohn – A modern day Pasiphae is one step closer to her desire.

charles austin – The citizens of Crawford put up friendly reminders all over town to encourage Cindy Sheehan to keep to her fast.

McGehee – The Israeli Air Force rolls out some new ordnance for its war on Hezbullah.

Bithead – The trick to this porcine transportation thing was knowing when the piggy would run all the way home.

Mythilt – Cindy Sheehan prepares to worship at the shrine of Michael Moore.

“Abdul you fool. I know a Trojan Pig is easier to fashion than a Trojan Camel, but do you really think the Joos will go for Pork?”

The Trojan pig ploy worked and Northern Israel was suddenly full of hordes of invaders in red condoms.

The Thursday contest has already made the obligatory Public Service Announcement.