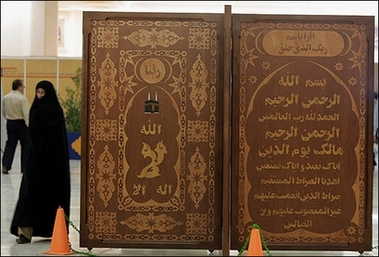 Second: Chuckster – Welcome to the Islamic “The Price is Right” Now…our next item up for bid…

Third: G.A. Phillips – blowup of a newly uncovered Email from Lucifer to a teen aged Mohammad.

charles austin – Pay no attention to the mullah behind the screen!

FreakyBoy – The Koran port-a-potty and it’s designer were never heard from again.

yetanotherjohn – Its all Greek to me.

Gollum – At the Ayatollah’s new walk-up “Qur’an-iosks” you can:
* book a pilgrimage to Mecca or Medina
* volunteer for martyrdom (preview the virgins first!)
* send a fatwah to your favorite infidel; or
* arrange for the stoning of female family members
all without the lengthy wait times usually associated with traditional mosques! Look for these features and more coming to a goat-market near you!

Koranic advice while you wait – 5 cents.
(The Prophet is way out)

If we’ve ever needed the (orange) cones of silence we need them now.

Judge Roy Moore’s placement of the 10 commandment monument passed without further protest after construction of the new kiosk.

Monday contest is already impressed with the Magnitude.

Riding Sun is still looking for Totoro.
Clash of Civilizations has civilization lost.