The VDubs Rocks Edition OTB Caption ContestTM is now over. 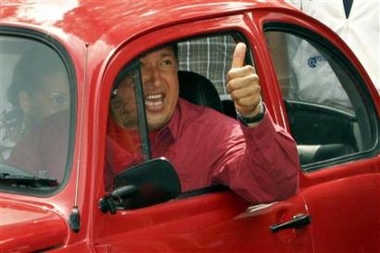 Third: Adjustah – Hugo in his Yugo

“It sits ten, Me, Castro, Kim Jong-Il, and Mahmoud in the seats; and six Sunni’s in the ashtray.”

Bill Gates knew he had a winner when he locked in Chavez as the spokesperson for his new Car-Tunes.

The designer of this car is A-OK with me.

Thursday contest is already having hot-flashes.