The We’re Not In Kansas Anymore Totoro Edition OTB Caption ContestTM is now over. 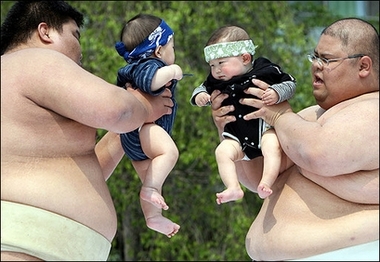 Second: Hodink – “My mom says, ‘Never date a man with bigger boobs than you have.'”

Ingress – Kentucky Derby jockeys were announced today. And we think they are getting smaller every year.

FormerHostage – I love these things! — Creamy outside and crunchy in the middle!

Kid on Left: “Ok Which one is Gamera and which is Godzilla?”

Did this picture make you think of Sheryl Crow’s one sheet policy too?

Monday Contest was up at the butt crack of Dawn Don. (nevermind)