The Fruit Of The Loon Edition OTB Caption ContestTM is now over. First: MikeM – Just before tracking down Han Solo, Greedo made a trip to San Francisco.

Second: DaveD – Trust me, anyone who is anyone won’t be seen without it at the Beijing Olympics.

Bithead – “OK, everyone sing along, you know the words…..’ Smelly cat, smelly cat, what are they feeding you…..'”

Reader – “The Force is wasted on this one.”

yetanotherjohn – Don’t ask, don’t tell be damned. Is there any question about Private Johnson?

Elmo – Where have all the flowers gone?

Another day, another red, blue, and electric yellow dollar.

Marvin was just a few pins shy of being firmly seated on the motherboard. 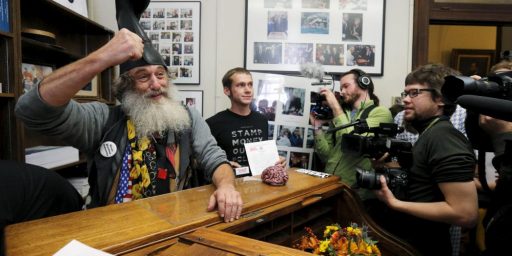