The Quasi Bloato Edition OTB Caption ContestTM is now over. First: yetanotherjohn – Unfortunately for Jabba, the rumors of anyone being able to score at an Obama rally proved to be untrue.

Second: charles austin – Has anyone else noticed the line keeps getting shorter and shorter in front of Jabba?

Bithead – The attendees to the “Obama for President” rally became inatentive when Rosie O’Donnel stood to speak.

DL – Contest of the Day: can you spot the one who still is eating trans-fats?

Helen Thomas finally has been moved to the back of the Whitehouse Press Corp.

Which one is Jabba? Turd one on the left.

Quonset the Hut was often mistaken for his brother Jabba.

“How bout nuther fried peanutbutter-nana sandwich?” “Thank you very much.” 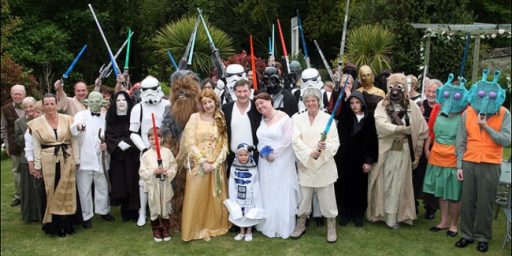