Second: McGehee – Upon seeing the photo at left, Vice President Cheney reacted, “I wish those Democrats would stop bringing up my daughter!”

Scott T – Why not to conduct Genetic Engineering on dogs.

Maniakes – Is the spinach still in my teeth?

bithead – Before this, nobody knew that Mr. Cheney could speak dog, or found them attractive.

DL – After the surprisingly agressive results of CheneyÃ¢€™s newest pacemaker, he has been shifted over to the Dept of Defense. Rummy, meanwhile is working on a new more compassionate Gitmo mascot, seen on the left

After reading the complete Harry Potter series, Dick found he was able cast a transformation on Hillary clinton.

“I thought he looked a little suspicious, but I never thought that little sissy was the White House spy.” 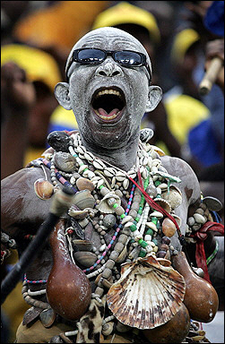