The most recent caption contest is now closed. 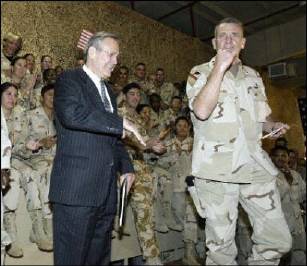 1st AprilGabby: Rumsfeld chuckling, “For God’s sakes man, someone taped a ‘I am hung like a donkey’ sign on your back.”

2nd Nan: Get down with your bad self… Rumsfeld and Franks entertain the troups with an impromptu rap.

3rd Daniel Morris: U.S. Secretary of Defense Donald Rumsfeld and CENTCOMÃ¢€™s boss, General Tommy Franks explain to an live audience what a short, little pip-squeak former Iraqi Ã¢€œstrongmanÃ¢€œSaddam Hussein turned out to be. Ã¢€œHe doesnÃ¢€™t even come up to here,Ã¢€ said Mr. Rumsfeld. Not to be out-done, General Franks replies, Ã¢€œIÃ¢€™ve got more Ã¢€˜strong manÃ¢€™ in my little pinky than that SOB! HeÃ¢€™s the size of an ace of spades. Hoo-ah!Ã¢€