The Clinton-Clark Edition OTB Caption ContestTM has reached its conclusion. 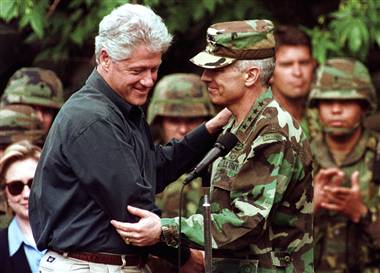 1st: Rodney Dill, “Well Wesley, you may have your way with her if you wish. But be forwarned, Only me and that guy on the ice, from the last OTB caption contest, have been able to survive her touch.”

3rd (Tie): Dodd, “Where is Bill’s hand and why is Wesley smiling?”
LuvsDoobies “Sir, that is not my hand you are shaking…”

Thanks to all the participants. Another contest will start later this evening.