Robert Novak is hung up on Clark’s penchant for cozying up to thugs.

Clark was a three-star (lieutenant general) who directed strategic plans and policy for the Joint Chiefs of Staff in Washington. On Aug. 26, 1994, in the northern Bosnian city of Banja Luka, he met and exchanged gifts with the notorious Bosnian Serb commander and indicted war criminal, Gen. Ratko Mladic. The meeting took place against the State Department’s wishes and may have contributed to Clark’s failure to be promoted until political pressure intervened. The shocking photo of Mladic and Clark wearing each other’s military caps was distributed throughout Europe.

For Emanuel, Rangel and other well-connected Democrats, Wes Clark seems a dream come true. He is walking the liberal line on taxes, abortion, racial quotas and Iraq. But he has military credentials and decorations that George W. Bush lacks. Even before formally announcing last week, Clark had 10 percent in Gallup’s first national listing of him among presidential candidates and was just 6 percentage points behind the front-runner. Clark comes over on television as a square-jawed straight-shooter, not the stormy petrel that the Army knew during 34 years active duty — including his conduct in the Banja Luka incident.

U.S. diplomats warned Clark not to go to Bosnian Serb military headquarters to meet Mladic, considered by U.S. intelligence as the mastermind of the Srebrenica massacre of Muslim civilians (and still at large, sought by NATO peacekeeping forces). Besides the exchange of hats, they drank wine together, and Mladic gave Clark a bottle of brandy and a pistol.

This was what U.S. Ambassador Richard Holbrooke’s team seeking peace in Yugoslavia tried to avoid by instituting the “Clark Rule”: whenever the general is found talking alone to a Serb, Croat or Muslim, make sure an American civilian official rushes to his side. It produced some comic opera dashes by diplomats.

This isn’t exactly a new revelation and, frankly, not in and of itself much to get excited about.

Bill Safire is concerned about the Clinton connection.

The Clintons decided that the Democratic primary campaign was getting out of hand. Howard Dean was getting all the buzz and too much of the passionate left’s money. Word was out that Dean as nominee, owing Clintonites nothing, would quickly dump Terry McAuliffe, through whom Bill and Hillary maintain control of the Democratic National Committee.

That’s when word was leaked of the former president’s observation at an intimate dinner party at the Clinton Chappaqua, N.Y., estate that “there are two stars in the Democratic Party Ã¢€” Hillary and Wes Clark.”

Meanwhile, the four-star general that Clinton fired for being a publicity hog during the Kosovo liberation has been surrounded by the Clinton-Gore mafia. Lead agent is Mark Fabiani, the impeachment spinmeister; he brought in the rest of the Restoration coterie. When reporters start poking into any defense contracts Clark arranged for clients after his retirement, he will have the lip-zipping services of the Clinton confidant Bruce Lindsey.

Either they are for him because (altruistic version) they think Clark would best lead the party and country for the next eight years, leaving them applauding on the sidelines, or (Machiavellian version) they think his muddy-the-waters candidacy is their ticket back to the White House in 2004 or 2008.

Indeed. But, then, so what? I’m no fan of the Clintons, but their endorsement would obviously be helpful for a Democratic hopeful. And it’s not like we live in the days of smoke-filled rooms. Clark would have to make it through the primary gauntlet to get the nomination; it’s not like the Clintons have the power to simply annoint him.

Joe Klein is mainly bemused by what he terms the “savior complex,” the endless desire of Democrats for a candidate who can just save them from another four years of Bush.

One of the collateral amusements of General Wesley Clark’s nascent presidential candidacy was the unseemly rush of certain liberals to embrace a member of the U.S. Army after decades of knee-jerk loathing for all things military. In an open letter encouraging Clark to run, Michael Moore, the fastidiously unkempt left-wing documentarian, wrote, “Michael Moore likes a general? I never thought I’d write those words.

Howard Fineman has a novel theory: Clark is miffed at the Republicans because they won’t give him a job:

After Al Qaeda attacked America, retired Gen. Wes Clark thought the Bush administration would invite him to join its team. After all, heÃ¢€™d been NATO commander, he knew how to build military coalitions and the investment firm he now worked for had strong Bush ties. But when GOP friends inquired, they were told: forget it.

WORD WAS THAT Karl Rove, the president’s political mastermind, had blocked the idea. Clark was furious. Last January, at a conference in Switzerland, he happened to chat with two prominent Republicans, Colorado Gov. Bill Owens and Marc Holtzman, now president of the University of Denver. “I would have been a Republican,” Clark told them, “if Karl Rove had returned my phone calls.” Soon thereafter, in fact, Clark quit his day job and began seriously planning to enter the presidential race–as a Democrat.

Hmm. Wonder what Michael Moore would think of that? 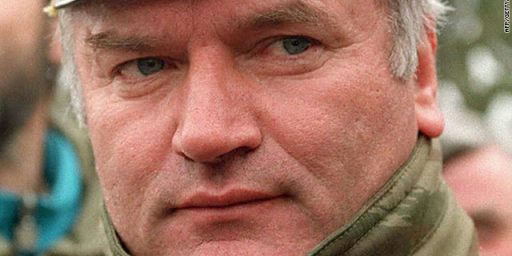 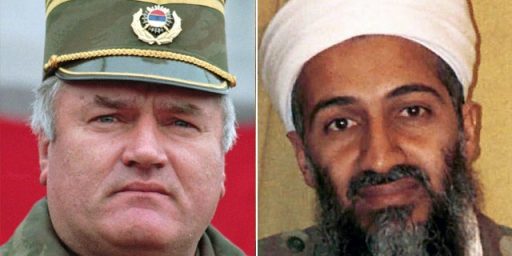