The Crifford Edition OTB Caption ContestTM is now over. 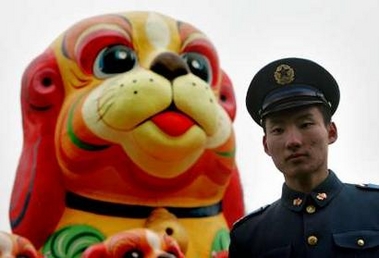 First: Bithead – It’s our new search engine mascot; It doesn’t find a damn thing, but it sure is cute to look at.

Second: spacemonkey – Chinese military were on hand to insure Chinese dislexia sufferers did not celebrate ‘Year of the God’

Third: Steven L. – At last, after years of working on the secret project, we are ready to take on the Japanese and their damn godzilla.

The Pirate – A Chinese Policeman guards much need food supplies for North Korea.

Maggie – When The Year of the Dog arrived, Google executives mistakenly thought it gave them an excuse to become China’s newest lapdog.

Noreaster – Ah, so Yankee Imperialist pig, you wish to suffer the wrath of our latest invincible weapon?

“Dog can’t find anything, we call him Googer.”

The Thursday contest is still celebrating the Chinese New Year.