Congress is Powerless to Stop Presidential Strike on North Korea 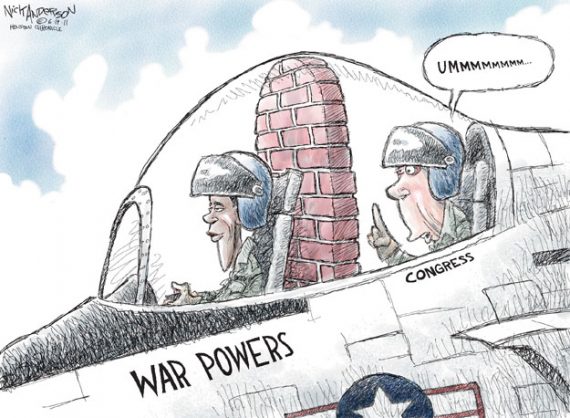 As I noted Monday, some Senate Democrats wrote a letter to President Trump declaring that a so-called “bloody nose” attack on North Korea would be illegal. This morning, RealClearDefense published my response essay, “‘Bloody Nose’ Strike Illegal but Unstoppable.”

They are certainly right. Under the provisions of the 1973 War Powers Resolution, “The constitutional powers of the President as Commander-in-Chief to introduce United States Armed Forces into hostilities, or into situations where imminent involvement in hostilities is clearly indicated by the circumstances, are exercised only pursuant to (1) a declaration of war, (2) specific statutory authorization, or (3) a national emergency created by attack upon the United States, its territories or possessions, or its armed forces.” While it has never been tested in court, there’s little question that this framing is Constitutionally sound. (The subsequent provisions giving Congress the power to force the president to cease hostilities after 60/90 days are much more contested.)

The problem, alas, is that there’s simply nothing the Senate, or the Congress as a whole, can do to stop the President from acting as he sees fit. The House could certainly impeach him after the fact for overstepping his legal authority and, subsequent to that, the Senate could punish him by removing him from office. But the strike itself would be a fait accompli—as would the almost certain international war that would follow.

Realistically, then, a President’s action with a force-in-being is limited mostly by the political fallout that ensues, not the approval of Congress.

Historically, the size of the force was itself a powerful constraint. While the United States has maintained a sizable Navy for the last century and a half, the Army was typically a garrison force until Congress declared war and provided the authority and money to build it up. That tradition ceased with the advent of the Korean War in 1950. While the nation continued buildups for war and drawdowns after, the exigencies of the Cold War and the desired for continued global hegemony in its aftermath have kept the “peacetime” force massive by global standards. This has significantly enhanced the freedom of maneuver of the commander-in-chief.

The existence of nuclear forces complicates matters even more. The deterrence strategy of the Cold War depended on the President being able to order a massive retaliatory strike on the Soviet Union in short order. It was simply not feasible to involve Congress in the decision, given the exigencies of time. While the Cold War has been over more than a quarter-century, few questioned the notion that the commander-in-chief should retain that power until Trump assumed that post and began routinely issuing provocations via his Twitter account.

The bottom line is that absent radical disarmament on a scale that no serious analyst is calling for, the major restraint on a President’s war powers rests with his or her character and good judgment. The public ought to seriously weigh whether they trust a candidate to make life-and-death decisions before entrusting them with such awesome responsibilities. Failing that, the Constitution provides the extreme options of removal via the aforementioned impeachment process and the provisions of the 25th Amendment. Both of those are extreme options, however, that would undermine faith in our democracy if undertaken in other than the most exigent circumstances. Otherwise, we must wait until the next election and hope the public chooses more wisely—and that the commander-in-chief does not start World War III in the meantime.

Webb, Rice, and the Limits of Presidential Power

Congress Must Vote Before We Expand The Attacks On ISIS