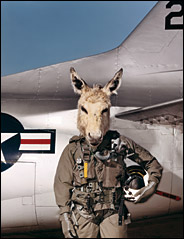 James Traub has an interesting piece on this topic in this week’s NYT Magazine. A couple of excerpts:

A few weeks ago, I asked Howard Dean how, given his vehement opposition to the war in Iraq, he felt he could overcome the Democrats’ reputation as the antiwar party. ”I think you’re still in the old paradigm, which says that they’re the party of strength and we’re the party of weakness,” Dean admonished me as I sat across from him on his campaign plane. The chaos in Iraq, he said, had upended the old stereotypes. In John F. Kennedy’s day, Dean pointed out, the Democrats enjoyed the reputation as the party of resolution. ”I think this may be the year to regain it, oddly enough,” Dean said. ”Oddly enough” is right. It seems awfully unlikely that in the first presidential election since 9/11, against a president who has spent most of his administration carefully cultivating and reinforcing his role as commander in chief, the Democrats can regain the status as the party of national security, which they lost during the Vietnam War. But that is precisely what party strategists were hoping through the fall as American troops got caught in the mayhem of Iraq and the nation’s standing in the world plummeted lower and lower. And they had reason to think so. A poll conducted in November by the nonpartisan PIPA-Knowledge Networks found that 42 percent of Americans said that the president’s handling of Iraq decreased the likelihood of voting for him, versus 35 percent who said it had increased the likelihood. Another poll taken around the same time found that a majority of respondents believed that President Bush is ”too quick to use our military abroad” and that he practices a ”go-it-alone foreign policy that hurts our relations with allies.” Earlier, Democracy Corps, a Democratic polling and policy organization headed by the consultants James Carville and Robert Shrum and the pollster Stanley B. Greenberg, published a study with the following conclusion: ”When Democrats put out a clear message on national security, it now plays Bush’s post-9/11, post-Iraq message to a draw.”

Maybe. But this strikes me as more likely:

The Democrats seem trapped between two irreconcilable impulses, or litmus tests. This is especially obvious, and painful, with figures like John Kerry, who has tried to have it both ways. In the run-up to the war, Kerry harshly criticized President Bush for alienating our allies and then voted for the resolution authorizing war. Then he voted against the $87 billion appropriation, complaining that the president lacked a clear postwar plan. As Baghdad plunged into chaos and Dean worked his magic, Kerry began to sound more and more like an antiwar candidate. And then when Saddam Hussein was captured, Kerry criticized Dean for failing to acknowledge the full magnitude of the achievement. It’s no wonder that Chris Matthews tied Kerry into a pretzel when he pressed him on ”Hardball” to supply a ”yes or no answer” on Iraq.

You can imagine two very different solutions to the irreconcilable-litmus-test problem. If the capture of Saddam Hussein leads to a rapid improvement of conditions in Iraq, the Democratic litmus test could change, and the party could nominate a candidate who couldn’t be stereotyped as soft. And if, alternatively, conditions in Iraq fully disintegrate, the general election litmus test could change, and Howard Dean could prove to have been prescient. But there is a sizable body of opinion that argues that the Democrats cannot overcome their historic reputation with a candidate who opposed the war, or perhaps even opposed the $87 billion appropriation — no matter what his other views or his resume.

Michael O’Hanlon, a senior fellow at the Brookings Institution, has a nightmare in which Dean wins the nomination, conditions in Iraq improve modestly and in the course of a debate, President Bush says: ”Go to Iraq and see the mass graves. Have you been, Governor Dean?” In this nightmare, Bush has been, and Dean hasn’t. ”Saddam killed 300,000 people. He gassed many of these people. You mean I should have thought there were no chemical weapons in the hands of a guy who impeded our inspectors for 12 years and gassed his own people and the Iranians?” O’Hanlon glumly says that he has resigned himself to the thought that ”the Democratic base is probably going to lose the Democrats the election in 2004.”

Strong and wrong beats weak and right — that’s the bugbear the Democrats have to contend with. George McGovern may have had it right in 1972, but he won Massachusetts, and Richard Nixon won the other 49 states. McGovern recently said that he is a big fan of Howard Dean, whose campaign reminds him very much of his own. Dean may want to ask him to hold off on the endorsement.

Indeed. Or Michael Dukakis, for that matter. 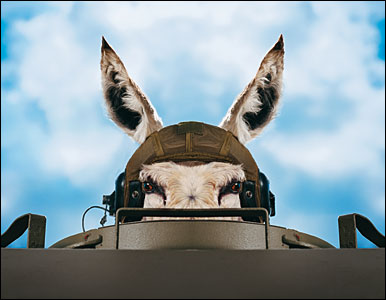