The juxtaposition of these two stories at YahooNews this morning is a tad odd:   Michael Phelps acknowledges photo using marijuana pipe and Santonio Holmes goes from drug dealer to Super Bowl MVP.

Are we to conclude that illicit drugs are the route to athletic achievement?

UPDATE: Radley Balko pens a “Letter From Michael Phelps” arguing that great athletes deserve to get high after all they’ve sacrificed for us.

UPDATE II: In the comments, Radley explains that he’s merely saying Phelps should be “left the hell alone.”  I’d agree, except that Phelps is engaged in illegal conduct.  Granted, conduct that shouldn’t be illegal, but still.

Commenter JimT counters that this is “exactly the same” as Babe Ruth “holding a beer can in 1922.”

Update (Steve Verdon): Just thought I’d chime here because unlike the other OTB writers I have a son who swims competively. Our whole family watched with excitement as the men’s 400×100 relay team beat the French team making it possible for Michael Phelps to go on to earn a record breaking 8 gold medals. I’m sure if one were to ask him who he looks up to in swimming that Michael Phelps would be in the top three if not number one. Do I find the idea of Michael Phelps smoking marijuana a big deal? No. For one thing I don’t think anyone, let alone my son, is going to do what Michael Phelps does with mindless devotion. Another, is that people often make mistakes or do things that are not very smart. And last, the important aspects of Michael Phelps has accomplished are through dedication, hard work, and hard work. If anyone wants to come even close to accomplishing what Phelps has accomplished, those are the things they will need to emulate. Emulating him on the pot smoking alone will get you nowhere in swimming. Still if my son tries to get cute with me on this, I’ll be sure to use this stand by argument, “Look, when you win 8 gold medals at the Olympics, 7 of them in world record time, then you can smoke pot. Until then and so long as you live in my house you wont.” 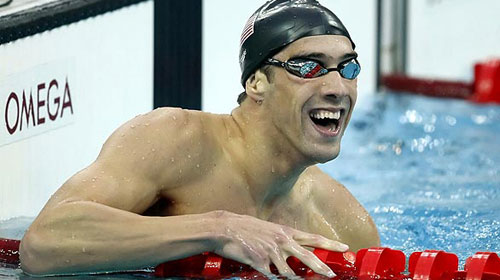