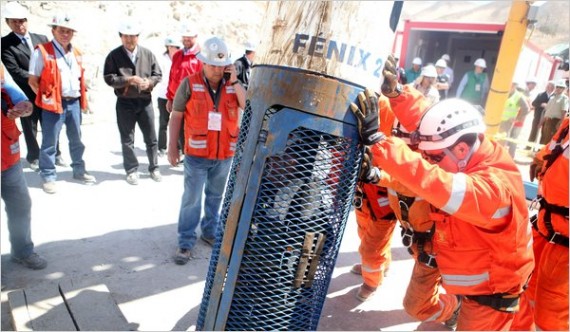 After spending two months half a mile below the surface, and a rescue effort that took just about twenty-four hours, the last of the 33 Chilean miners trapped below the surface of the Earth has been brought to safety:

SAN JOSÉ MINE, Chile — Two months, nine days, and eight hours after their excruciating ordeal began, the last of the 33 miners trapped in an apartment-sized hole a half mile under Chile was delivered safely to the earth’s surface, capping perhaps the most dramatic survival story in mining history.

With the entire nation rapt and much of the world riveted, the last miner, Luis Urzua, rose smoothly out of the small hole in the ground, prompting an eruption of applause and cheers that seemed just as heartfelt as the outpouring that followed the emergence of the first miner nearly a day earlier.

The sight of the miner’s face — wearing sleek sunglasses to protect his fragile eyes from UV rays — brought a joyous end to an operation that began under grim circumstances in early August, when the mine caved in.

As the canister carrying the last miner — the crew’s foreman — neared the surface, a crowd of workers, officials and loved ones chanted, clapped and sang a song of celebration in unison. Then, freed from the hole, Mr. Urzua  stepped into the arms of jubilant rescuers who quickly wrapped him in the flag of Chile as a siren blared.

“Thanks to everybody, thanks to the rescuers, thanks to all of Chile and everyone involved in this operation,” said Mr. Urzua, 54. President Sebastián Piñera, gripping Mr. Urzua’s hands, called him a “great captain” and said the miners were an example of “companionship, courage and loyalty.”

Led by President Piñera, who urged everyone to “sing with our helmets on our hearts,” the crowd removed their helmets and sang the national song of Chile, triumphantly, as if a tiresome war had just ended.

The final rescue capped a dramatic, months-long ordeal. For more than two weeks after the collapse, rescuers had no contact with the miners and could not be sure they were even alive. But by late evening here, the precarious mission to hoist the miners to safety had moved along so efficiently that it was clear it would end far ahead of schedule.

For 22 hours, the miners emerged at regular intervals in a pageant that has moved a worldwide audience — watching on television, on computers, even on mobile phones — to tears and laughter.

It’s truly an incredible story, and it’s good to hear that these men made it out safely. It’s also nice to have some good news in a world that seems to be filled so frequently with nothing but bad.

Miners’ Families Given False Hope Before Told of Tragedy