In news that will no doubt please the estimable Glenn Reynolds, DARPA has taken a big step toward the long-awaited flying car: Flying Humvees 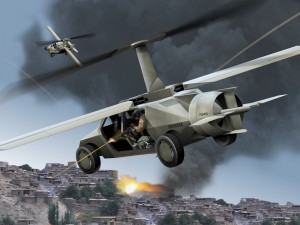 In news that will no doubt please the estimable Glenn Reynolds, DARPA has taken a big step toward the long-awaited flying car: Flying Humvees:

Instead of adding armor or changing the shape to deflect bomb blasts, the agency reasoned, why not let it leap into the sky at the first sign of danger or inconvenience? That’s exactly what Darpa’s “Transformer” project is supposed to be: a mashup of a helicopter, plane and armored truck. And it just came a step closer to reality.

AAI Corporation, a Maryland-based aerospace and defense company, won a $3.05 million contract with Darpa to see if it the technology behind the Transformer can, well, get off the ground, Aviation Week reports. Based on so-called “compound helicopter” technology that the company is developing with Carter Aviation Technologies, the gist is that AAI’s design for the Transformer envisions it to carry four soldiers on the road as a car, but the rotor blades on top allow it to take off vertically into the air. The car’s takeoff functions are supposed to be automated, so soldiers or marines don’t have to be aviators to get it off the ground.

That’s not all. As Danger Room emerita Sharon Weinberger reported in June, it releases DeLorean-like retractable wings, allowing it to fly faster than a conventional helicopter. “Envision a Humvee-like vehicle with wings that fold out from the side and attach just above the rear door,” AAI Vice President Steven Reid told Weinberger. Elements of three vehicles in one.

If this thing, er, takes off, it’s only a matter of time before civilian versions exist, too.