Days after "Friday Night Lights" author Buzz Bissinger endorsed Mitt Romney, the writer and producer of the acclaimed television spin-off is accusing the campaign of plagiarizing the show's catchphrase. 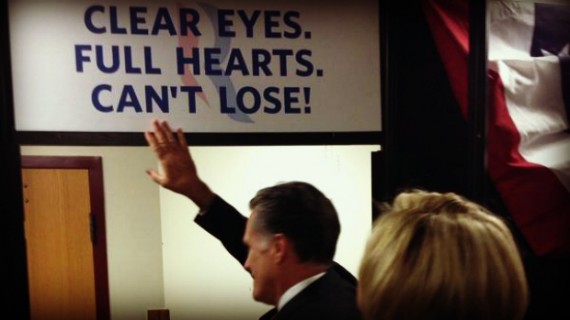 Days after “Friday Night Lights” author Buzz Bissinger endorsed Mitt Romney, the writer and producer of the acclaimed television spin-off is accusing the campaign of plagiarizing the show’s catchphrase.

Peter Berg, the writer-director of the Friday Night Lights movie and television series, is not pleased that Republican presidential candidate Mitt Romney has co-opted a phrase from the show for his campaign appearances.

In a letter to the Romney campaign sent Friday and obtained exclusively by The Hollywood Reporter, Berg calls the use of “Clear Eyes, Full Hearts, Can’t Lose” an act of stealing. “Your politics and campaign are clearly not aligned with the themes we portrayed in our series,” Berg writes in the letter. “The only relevant comparison that I see between your campaign and Friday Night Lights is in the character of Buddy Garrity — who turned his back on American car manufacturers selling imported cars from Japan.”

Romney has used the “Clear Eyes” phrase — which originated as a rallying cry for the high school football team on the FNL television series — in several campaign speeches, and it appears on his Facebook page. The Republican presidential nominee and his wife, Ann, are fans of the series, which ended its five-year run on NBC and DirecTV last year. Romney said in Iowa earlier this week that the phrase is “compelling.” “That’s Americans,” he told an audience. “We have clear eyes — we know what we believe. Full hearts — we love this country and we can’t lose. This is a time for Americans to make a choice. We’re going to take back this country.”

It is now so commonplace for artistic types to complain when campaigns expropriate their work that it’s hardly noteworthy. This one caught my attention because 1) I liked the show, 2) the Bissinger-Berg split is somewhat amusing, and 3) Berg’s insistence that Romney’s “politics and campaign are clearly not aligned with the themes we portrayed in our series” is baffling.

Offhand, the show struck me as wholly non-political. But, as Hollywood Reporter’s Matthew Belloni points out, there were some political plotlines from time to time:

But the low-rated, critically acclaimed series set in a Texas town dominated by football also featured several themes that might not necessarily be approved by a Romney administration. Among them: a character (Madison Burge) goes through with an abortion late in the show’s fourth season. The decision follows a one-night stand the character had with a football star (Matt Lauria), and it is the school’s principal Tami Taylor (Connie Britton) who guides the student through the decision process.

Another theme explored in the series is that of military parents. A character (Zach Gilford) is raised by his ailing grandmother after his mother departs, and his military father shows little sign of caring for his son.

But even these are a stretch. The abortion plotline could certainly be seized upon by those on either side of the controversy; certainly, Berg did not portray abortion as an easy, consequence-free choice. And I’m not sure what the partisan political implications of the quarterback’s dad being more devoted to his soldiers than to his own son; all four men on the major ticket are devoted fathers and there’s very little light on their policy on troop deployments.

I don’t mind that Berg is speaking out about his catchphrase being used by a candidate he opposes. But it strikes me as odd that he’s trying to retrospectively position his most famous work as preaching Democratic themes. Indeed, I’d bet that the show’s audience is more inclined to hail from the parts of the country who are going to vote Bissinger’s way than Berg’s.