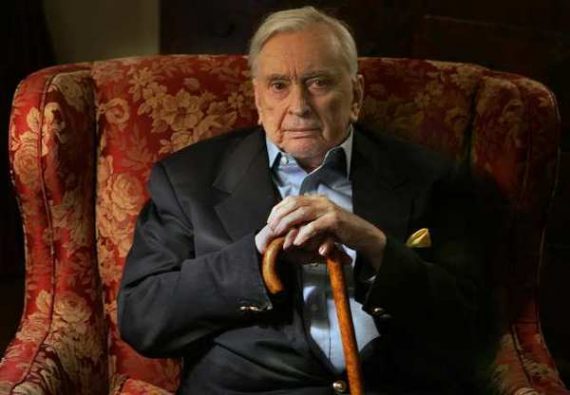 Gore Vidal, the elegant, acerbic all-around man of letters who presided with a certain relish over what he declared to be the end of American civilization, died on Tuesday at his home in the Hollywood Hills section of Los Angeles, where he moved in 2003, after years of living in Ravello, Italy. He was 86.

The cause was complications of pneumonia, his nephew Burr Steers said by telephone.

Mr. Vidal was, at the end of his life, an Augustan figure who believed himself to be the last of a breed, and he was probably right. Few American writers have been more versatile or gotten more mileage from their talent. He published some 25 novels, two memoirs and several volumes of stylish, magisterial essays. He also wrote plays, television dramas and screenplays. For a while he was even a contract writer at MGM. And he could always be counted on for a spur-of-the-moment aphorism, putdown or sharply worded critique of American foreign policy.

Perhaps more than any other American writer except Norman Mailer or Truman Capote, Mr. Vidal took great pleasure in being a public figure. He twice ran for office — in 1960, when he was the Democratic Congressional candidate for the 29th District in upstate New York, and in 1982, when he campaigned in California for a seat in the Senate — and though he lost both times, he often conducted himself as a sort of unelected shadow president. He once said, “There is not one human problem that could not be solved if people would simply do as I advise.”

Mr. Vidal loved conspiracy theories of all sorts, especially the ones he imagined himself at the center of, and he was a famous feuder; he engaged in celebrated on-screen wrangles with Mailer, Capote and William F. Buckley Jr. Mr. Vidal did not lightly suffer fools — a category that for him comprised a vast swath of humanity, elected officials especially — and he was not a sentimentalist or a romantic. “Love is not my bag,” he said.

By the time he was 25, he had already had more than 1,000 sexual encounters with both men and women, he boasted in his memoir “Palimpsest.” Mr. Vidal tended toward what he called “same-sex sex,” but frequently declared that human beings were inherently bisexual, and that labels like gay (a term he particularly disliked) or straight were arbitrary and unhelpful. For 53 years, he had a live-in companion, Howard Austen, a former advertising executive, but the secret of their relationship, he often said, was that they had never slept together.

Mr. Vidal graduated from Exeter at 17 — only by cheating, he later admitted, on virtually every math exam — and enlisted in the Army, where he became first mate on a freight supply ship in the Aleutian Islands. He began work on “Williwaw,” a novel set on a troopship and published in 1946 while Mr. Vidal was an associate editor at the publishing company E. P. Dutton, a job he soon gave up. Written in a pared-down, Hemingway-like style, “Williwaw” (the title is a meteorological term for a sudden wind out of the mountains) won some admiring reviews but gave little clue to the kind of writer Mr. Vidal would become. Neither did his second book, “In a Yellow Wood” (1947), about a brokerage clerk and his wartime Italian mistress, which Mr. Vidal later said was so bad, he couldn’t bear to reread it. He nevertheless became a glamorous young literary figure, pursued by Anaïs Nin and courted by Christopher Isherwood and Tennessee Williams.

In 1948 Mr. Vidal published “The City and the Pillar,” which was dedicated to J. T. (Jimmie Trimble). It is what we would now call a coming-out story, about a handsome, athletic young Virginia man who gradually discovers that he is homosexual. By today’s standards it is tame and discreet, but at the time it caused a scandal and was denounced as corrupt and pornographic. Mr. Vidal later claimed that the literary and critical establishment, The New York Times especially, had blacklisted him because of the book, and he may have been right. He had such trouble getting subsequent novels reviewed that he turned to writing mysteries under the pseudonym Edgar Box and then, for a time, gave up novel-writing altogether. To make a living he concentrated on writing for television, then for the stage and the movies.

Work was plentiful. He wrote for most of the shows that presented hourlong original dramas in the 1950s, including “Studio One,” “Philco Television Playhouse” and “Goodyear Playhouse.” He became so adept, he could knock off an adaptation in a weekend and an original play in a week or two. He turned “Visit to a Small Planet,” his 1955 television drama about an alien who comes to earth to study the art of war, into a successful Broadway play. His most successful play was “The Best Man,” about two contenders for the presidential nomination. It ran for 520 performances on Broadway before it, too, became a successful film, in 1964, with a cast headed by Henry Fonda and a screenplay by Mr. Vidal. It was revived on Broadway in 2000 and is now being revived there again as “Gore Vidal’s The Best Man.” Mr. Vidal’s reputation as a script doctor was such that in 1956 MGM hired him as a contract writer; among other projects he helped rewrite the screenplay of “Ben-Hur,” though he was denied an official credit. He also wrote the screenplay for the movie adaptation of his friend Tennessee Williams’s play “Suddenly, Last Summer.”

In the ’60s Mr. Vidal also returned to writing novels and published three books in fairly quick succession: “Julian” (1964), “Washington, D.C.” (1967) and “Myra Breckenridge” (1968). “Julian,” which some critics still consider Mr. Vidal’s best, was a painstakingly researched historical novel about the fourth-century Roman emperor who tried to convert Christians back to paganism. (Mr. Vidal himself never had much use for religion, Christianity especially, which he once called “intrinsically funny.”) “Washington, D.C.” was a political novel set in the ’40s. “Myra Breckenridge,” Mr. Vidal’s own favorite among his books, was a campy black comedy about a male homosexual who has sexual reassignment surgery and turns into a woman.

Perhaps without intending it, Mr. Vidal had set a pattern. In the years to come his greatest successes came with historical novels, especially what became known as his American Chronicles sextet: “Washington, D.C.,” “Burr” (1973), “1876” (1976), “Lincoln” (1984), “Hollywood” (1990) and “The Golden Age” (2000). He turned out to have a particular gift for this kind of writing. These novels were learned and scrupulously based on fact, but also witty and contemporary-feeling, full of gossip and shrewd asides. Harold Bloom wrote that Mr. Vidal’s imagination of American politics “is so powerful as to compel awe.” Writing in The Times, Christopher Lehmann-Haupt said, “Mr. Vidal gives us an interpretation of our early history that says in effect that all the old verities were never much to begin with.”

But Mr. Vidal also persisted in writing books like “Myron” (1974), a sequel to “Myra,” and “Live From Golgotha: The Gospel According to Gore Vidal” (1992), which were clearly meant as provocations. “Live From Golgotha,” for example, rewrites the Gospels, with Saint Paul as a huckster and pederast and Jesus a buffoon. John Rechy said of it in The Los Angeles Times Book Review, “If God exists and Jesus is His son, then Gore Vidal is going to Hell.”

Only if they don’t have a sense of humor.

Incidentally, Vidal’s father and, until he took his maternal grandfather’s last name as his first name as a teenager, namesake, Eugene Louis Vidal, was a rather accomplished man in his own right:

Vidal’s father, a West Point football quarterback and captain, and an all-American basketball player, was director of the Commerce Department’s Bureau of Air Commerce (1933-1937) in the Roosevelt administration,[10] was one of the first Army Air Corps pilots and, according to biographer Susan Butler, was the great love of Amelia Earhart’s life. In the 1920s and 1930s, he was a co-founder of three American airlines: the Ludington Line, which merged with others and became Eastern Airlines, Transcontinental Air Transport (TAT, which became TWA), and Northeast Airlines, which he founded with Earhart, as well as the Boston and Maine Railroad. The elder Vidal was also an athlete in the 1920 and 1924 Summer Olympics (seventh in the decathlon; U.S. pentathlon team coach).

A rather impressive duo.