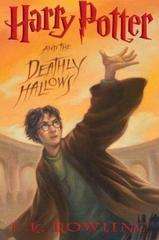 I wanted to have this posted in a more timely fashion but, between starting a new job and a hard drive crash that kept me offline for over a week, it ended up on the backburner. Nevertheless, for that as might be interested, here’s my review of the final Harry Potter book.

I won’t go as far as Sophie Masson and say that Harry Potter is the best fantasy series ever. But it is delightful, engaging, and compelling. Yes, they’re intended as juveniles but, in the tradition of the best such works (Narnia and Earthsea being the most obviously relevant examples), are eminently enjoyable by adults, as well. One finds oneself increasing attached to the characters and concerned for their fates. The end of the series is accordingly leavened by the bittersweet realization that one won’t get any further opportunities to spend time with these wonderful people.

Perhaps most importantly, now that it’s all said and done, the moral lesson of the series is neither trite nor obvious but, rather, important and thoroughly developed.

Turning to this last point first, note that it is especially significant because the first indications of the lesson being taught appeared in the early books suggested that we were in for just one more in an endless series of “Love conquers all” morality plays. That’s certainly the core of it but, as with other aspects of her tale, Rowling’s real point is considerably more nuanced.

The lessons we teach our children (and this series has certainly taught a lot of them) are of vital importance. The idea that “popular” works can also serve this function is often discounted, but the lessons embedded in such works are arguably among the most important, since they reach so many. Trust, loyalty, bravery, honesty, humility, courage in one’s convictions… these are the lessons that Harry Potter teaches. Love does indeed conquer all, but it doesn’t do so painlessly. On the contrary, love often demands very heavy sacrifices indeed. In the end, however, they tend to be worth the cost.

The parallels between himself and Voldemort, first seen upon Harry’s visit to Olivander’s in Chapter 5 of Sorcerer’s Stone, emphasize how easy it would have been for Harry to go the same way as the Dark Lord. As we discover how he gained some of his powers and the various ways he and the Dark Lord are alike, the crucial distinction between them grows ever more important. Fate shapes us, but it’s what we do with what fate gives us that makes us who we are. Harry is frequently reminded of his similarities to Tom Riddle/Lord Voldemort, but his capacity to give and receive love (which Voldemort utterly fails to comprehend, making him evil) and the choices he makes as a result are what make him good.

This is underscored all the more forcefully when we learn what Snape’s really been up to all this time and why. As is her wont, Rowling leaves Snape’s true allegiance ambiguous as long as possible. But when we do finally learn his backstory — which turns out to be a rather more robust and interesting tale than I think most of us truly expected — Snape’s redemption arises from the same source: His capacity to love. Snape is a genuinely flawed (his pride caused him to ruin whatever relationship he might ever have had with Lily, for instance) but, while his beliefs led him to follow Voldemort, his love for Lily redeems him, leading him down the most dangerous and difficult path of any character in the series. Yet he does it and seems genuinely shocked when he discovers, or so he thinks, that it’s never been to “save” Harry at all.

Which leads us to Dumbledore. Even after his death Dumbledore guides those who “serve” him, often by outright manipulation. But, we discover, he really does know what he’s doing. Dumbledore’s final manipulation, via Snape’s memories, is intended to ensure that Harry is saved. We share Snape’s anger at Dumbledore’s intentions until we discover the real reason behind it, something we’ve been well prepared to do by the way Rowling leads us to that particular circumstance. In the end, however, the trust Dumbledore places on both Harry and Snape — and they in him — is as prescient as his gift to Ron.*

In the end, pretty much all the open questions are answered, most of them satisfyingly. Some people don’t make it to the end, which was to be expected. Rowling’s never shied away from killing characters when the plot demands it. Here, all of his substitute parents dead, Harry ends the story standing fully on his own two feet.

Other characters come into their own, as well, Neville Longbottom, most especially. That he took the lead among the students in Harry’s absence and was able to prove himself a “true Gryffindor” in the climax were especially rewarding. Ron and Hermione play a more central role in the resolution of the plot than they’ve been allowed to for some time, moving up somewhat from the more supportive roles they’ve fulfilled the last few books to actively participate in destroying Voldemort’s horcruxes (letting each of them, plus Neville, destroy one was a nice touch that underscored the fact that, without the help and support of his friends since Year One, Harry would never have made it this far).

There have been a lot of questions raised about just how much of the series Rowling really had planned out from the start. Well, I’ve reread a couple of the earlier books since finishing this one and I have to conclude that she wasn’t just winging it: The groundwork for almost every single major element of the climax of Deathly Hallows is laid in the closing chapters of Chamber of Secrets. She took us on a long, emotional — and very entertaining — journey to fill in the details on the way from from there to here. And taught some valuable lessons along the way.

—
* I note, however, that there’s a rather large plot whole in the Dumboledore-Snape-Harry dynamic: The only way that Snape could transmit the information Dumbledore needs Harry to get from him that would lead Harry to actually believe that information is the way it happened. But not even Dumbledore is prescient enough to know that Harry would just happen to be ready to hand under his Invisibility Cloak when Voldemort attacks Snape or that Voldement would just happen to walk away leaving a mortally wounded Snape just enough time for Harry to get the memories from him. It works very well as plotted, true. And Snape is clearly trying to follow Dumbledore’s instructions in asking to be allowed to go find Harry right before Voldemort sets Nagini on him. But we’re never told how Snape was supposed to overcome Harry’s immense distrust if events had turned out any other way.

Another plot problem arises with Harry’s plan to end the extraordinary power of the Elder Wand. Dumbledore apparently became the Wand’s master by defeating its previous possessor, Grindelwald, in a duel. But Grindelwald can’t have been the Wand’s master: He stole it, rather than defeating its master (plus, he should’ve been unbeatable with it). So, unless the Wand chose Grindelwald as its master anyway and Grindelwald fought Dumbledore with some lesser wand for some reason (which is hard to believe), the Wand has at least once chosen a new master after passing out of the hands of an old one without that master being defeated. It can do so again, making Harry’s plan unlikely to work.