As predicted, we’ll continue to have Hillary Clinton to kick around:

Hillary Rodham Clinton says she will remain in the presidential race “until there’s a nominee.” The former first lady declined to say whether that meant through the roll call of the states at the Democratic National Convention this summer.

I’m not convinced she’ll drop out then, either.

UPDATE (Alex Knapp): For those who are creatively inclined, Christopher Beam at Slate is running a contest to determine the “out-there, long-shot, one-in-a-kajillion occurrences must happen to Clinton or Obama to bring about the Obamapocalypse and hand Clinton the nomination.” You can submit your scenario at the link in Beam’s post. Personally, I think the only way Obama can lose is that it turns out that he’s not Barack Obama at all, but actually an incarnation of the Master, the Doctor’s nemesis, with plans to use the Earth as a staging area to build a Galactic Empire. 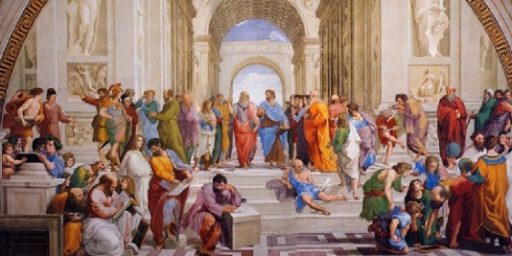 If Academics Wrote the News