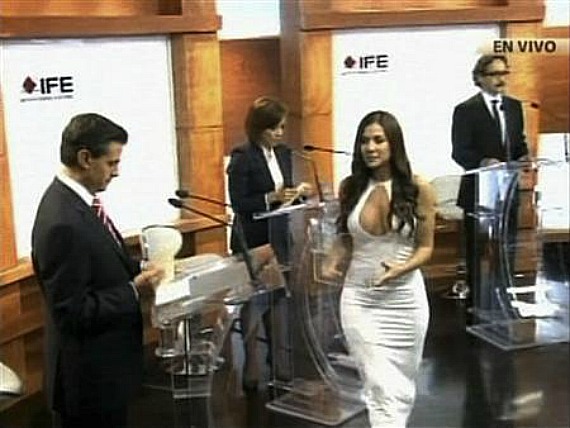 Mexico’s electoral authority apologized to voters on Monday after a sober presidential debate was upstaged by a former Playboy model and her revealing outfit.

Clad in a tight-fitting white dress with a cut below the neckline to show much of her cleavage, Julia Orayen was working as an assistant on the televised debate, which focused on the economy and the drug-related violence ravaging Mexico.

At the start of Sunday night’s debate, Orayen walked in front of the camera to hand out cards to the four candidates, and created an immediate stir on online social media.

The appearance lasting a few seconds quickly began trending on Twitter, generating thousands of mentions. Mexican newspaper Excelsior declared her the online winner of the debate.

While many Mexicans celebrated Orayen, others condemned the Federal Electoral Institute (IFE) for the incident, saying it had undermined the seriousness of the debate.

Oh come on, must you people always be so serious?