At 2:11am Alaska time this morning Lance Mackey left White Mountain following the mandatory eight hour layover there. Barring some mishap he’ll cross the finish line in Nome sometime between noon and three local time to win the 2009 Iditarod, the last great race on earth.

By all accounts the conditions along the Bering Sea portion of the race have been brutal. Race analyst Bruce Lee commented:

Mackey reported as he pulled into the village of Koyuk that he had just gone through the hardest run of this race and one of the hardest runs of his career.

Mackey’s dogs came in looking strong with leaders wagging their tails and pulling hard. One amazing aspect of this team is that Mackey was lead across the sea ice into this strong wind by a new leader that hasn’t even turned two years old yet.

Clearly, at this point the race is Mackey’s to lose. If he wins it will be his third consecutive triumph in the Iditarod. The victory will have have required determination, athleticism, skill, knowledge of the trail, a great relationship with his sled dogs, and luck. At one point Mackey actually fell asleep standing on the rails and fans of the race down here in the lower 48 wondered as they watched the little flag on the map indicating his GPS location veer from the trail. That cost him several hours and might well have proved disastrous.

But winning the race this authoritatively takes something else, too.

You can’t force a dog to pull a sled. They’ve got to want to do it and for a team to perform the way Lance’s has they’ve got to race with the joy that comes from performing the job you were born to do. Like the late, great Susan Butcher, Lance Mackey is dominating his sport by breeding the best sled dogs in the world. And that’s bound to change the face of sled dog racing for years to come.

The picture above is of Lance Mackey leaving the checkpoint at the village of Golovin. It’s from the Anchorage Daily News. 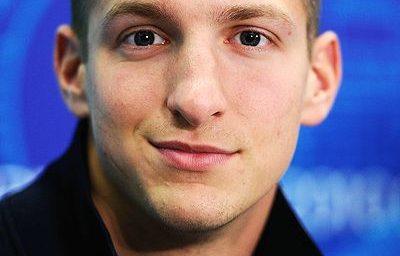