Federal immigration officials arrested 55 illegal aliens working at Dulles Airport — one of the launching points for the 9/11 attacks, I should note — with access to runways and airplanes.

An immigration raid at Dulles International Airport resulted in 55 arrests on Wednesday, Immigration and Customs Enforcement says. The people were doing contract work at a construction site, inside a secure area, where they would potentially have access to runways and airplanes.

ICE agents made their move as the workers were being bused to the site, checking work and immigration papers. The agency says one of the workers had an airport security badge, that grants unescorted access to the airport tarmac. ICE says allowing unauthorized workers into sensitive sites puts the nation’s infranstructure at risk.

Most of the people arrested will be flown an ICE detention facility in El Paso, Texas to begin removal proceedings. Officials say this operation and others like it aim to guard infrastructure. The agency says it’s important to make sure people who work at airports are in the United States legally.

Now, realistically, these guys were likely just low wage schmoes trying to make a living. There’s zero evidence–aside from the fact that at least one of them had a security badge he apparently wasn’t entitled to–that they were engaged in nefarious activities, let alone tied to al Qaeda in any fashion. But didn’t we create several federal agencies, including one that does nothing but airport security, for the sole purpose of making sure stuff like this doesn’t happen? 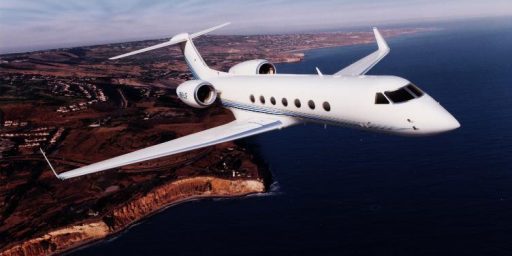