Isaac Hayes has quit “South Park,” claiming that the show has become intolerant of religion. 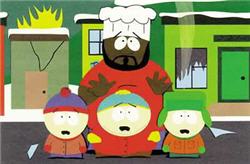 “There is a place in this world for satire, but there is a time when satire ends and intolerance and bigotry towards religious beliefs of others begins,” the 63-year-old soul singer and outspoken Scientologist said. “Religious beliefs are sacred to people, and at all times should be respected and honored,” he continued. “As a civil rights activist of the past 40 years, I cannot support a show that disrespects those beliefs and practices.”

“South Park” co-creator Matt Stone responded sharply in an interview with The Associated Press Monday, saying, “This is 100 percent having to do with his faith of Scientology… He has no problem — and he’s cashed plenty of checks — with our show making fun of Christians.” Last November, “South Park” targeted the Church of Scientology and its celebrity followers, including actors Tom Cruise and John Travolta, in a top-rated episode called “Trapped in the Closet.” In the episode, Stan, one of the show’s four mischievous fourth graders, is hailed as a reluctant savior by Scientology leaders, while a cartoon Cruise locks himself in a closet and won’t come out. Stone told The AP he and co-creator Trey Parker “never heard a peep out of Isaac in any way until we did Scientology. He wants a different standard for religions other than his own, and to me, that is where intolerance and bigotry begin.”

I have to agree with Stone on this one. The show has always been incredibly brutal on religion, even featuring Jesus as a character. It’s mighty late in the game to suddenly become sensitive.

Ed Morrissey agrees: “After nine seasons of foul-mouthed riffs on God, religion, molesting Catholic priests, the Mormon testament, and the Jews, Hayes has suddenly discovered that poking fun at religion is disrespectful? Has he even watched the show?”

Patrick Frey observes that, “What Hayes fails to mention is that he is full of it. For example: if he truly meant this, he probably wouldn’t have taken money for the episode in which Chef boxes Jesus and knocks him out with a single blow.”

Here’s the Scientology episode, “Trapped in the Closet.”

I read somewhere (I believe GQ) not long ago that Parker and Stone wanted to do this episode years ago but held off out of deference to Hayes.

In an interview published in GQ earlier this year, show co-creator Trey Parker said, “To be honest, what kept us from [parodying Scientology] before was Isaac Hayes. We knew he is a Scientologist and he’s an awesome guy. We were like, ‘Let’s just avoid that for now.’ … Finally, we just had to tell Isaac, ‘Dude, we totally love working with you and this is nothing personal, it’s just we’re “South Park,” and if we don’t do this, we’re belittling everything else we’ve ripped on.’ ”

The “Trapped” episode is slated to air again at 10 p.m. Wednesday on Comedy Central. The 10th season of “South Park” begins March 22.

Update 2: Miu von Furstenberg wonders whether Hayes was “pressured by the ghost of the late L. Ron Hubbard?”