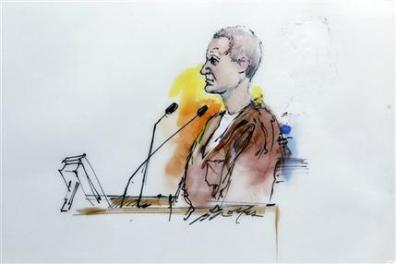 Jared Lee Loughner, accused in the mass shooting that wounded Rep. Gabrielle Giffords, is not mentally competent to stand trial, a federal judge in Arizona ruled.

Loughner earlier in the day had a loud outburst in court and was dragged away by authorities. He is charged with killing six people and wounding 13 more in January while Giffords was holding a meet-and-greet with constituents.

Sadly, not surprising. More as this develops.

Jared Loughner, who is charged in connection with the shooting of Rep. Gabrielle Giffords and the killing of six others, was ruled incompetent to stand trial by a federal judge at a competency hearing today in Phoenix.

Loughner will be sent to a hospital in Springfield, Mo., for treatment. He will not be released from custody during treatment, which could last indefinitely, The Arizona Republic reports.

“We believe he can be restored to competency with proper medication,” said Robbie Sherwood, a spokesman for the U.S. Attorney’s Office.

Loughner has pleaded not guilty to 49 crimes that killed six and wounded 13.

Just before noon PT Loughner started rubbing his forehead, lowered his head and rocked back and forth, the Republic writes, citing people in the courtroom. He looked at the judge and blurted out, “Thanks for the freak show. I saw her die in front of me.”

U.S. marshals then escorted Loughner from the courtroom.

It means Loughner will undergo about four months of intense therapy in an effort to reach a competent level.  He’ll be examined by teams of psychiatrists again at that point to make any determination.

The ruling came after a dramatic turn in the courtroom.

About 40 minutes into a hearing to determine his competency to stand trial, accused shooter Jared Loughner worked to help the court decide by shouting out in the courtroom, “she died right on front of me,” and other senseless words before U.S. Marshals tackled him and dragged him from the courtroom.

Fox 11 News Anchor Lou Raguse, in the courtroom, reported Loughner shouted, “Thank you for the freak show.  She died right in front of me.  You’re treasonous.”

The incident happened about 11:40 Wednesday morning in the federal district courthouse in Tucson.

A hearing was underway to determine his ability to contribute to his defense for the shootings and his competency to stand trial.  It was expected the ruling would be that he is incompetent since neither side opted to put each others psychiatrists on the stand to question them.

If he’s not “restored to competency,” one presumes he’ll spend the remainder of his days in a mental ward rather than prison.