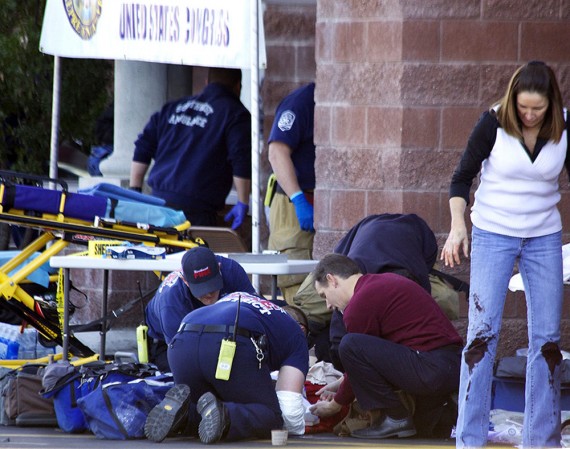 Jared Loughner was found competent to stand trial in a hearing today and immediately entered a guilty plea:

Loughner’s plea spares him the death penalty and came soon after a federal judge found that months of forcibly medicating him to treat his schizophrenia had made the 23-year-old college dropout competent to understand the gravity of the charges and assist in his defense.

Under the plea, he will be sentenced to life in federal prison without the possibility of parole.

The outcome was welcomed by some victims, including Giffords herself, as a way to avoid a lengthy, possibly traumatic trial and years of legal wrangling over a death sentence.

The pain and loss caused by the events of Jan. 8, 2011, are incalculable,” Giffords said in a joint statement with her husband, Mark Kelly. “Avoiding a trial will allow us — and we hope the whole Southern Arizona community — to continue with our recovery.”

Experts had concluded that Loughner suffers from schizophrenia, and officials at a federal prison have forcibly medicated him with psychotropic drugs for more than a year.

During the hearing, Loughner’s federal psychologist, Dr. Christina Pietz, testified that Loughner at different times believed and doubted whether Giffords survived the shooting, saying sometimes that there was no way anyone could have survived being shot to the head and other times that he knew she was alive.

“‘If this is true, Jared is a failure,'” Pietz said Loughner told her.

Pietz testified for an hour about how she believes Loughner became competent. Loughner listened calmly without expression. His arms were crossed over his stomach, lurched slightly forward and looking straight at Pietz.

At one point, he smiled and nodded when psychologist mentioned he had a special bond with one of the prison guards.

A plea agreement offers something for both sides, said Quin Denvir, a California defense attorney who has worked with Loughner attorney Judy Clarke on the case against unabomber Ted Kaczynski.

Prosecutors would avoid a potentially lengthy and costly trial and appeal, knowing that the defendant will be locked up for life. Clarke managed to avoid the death penalty for other high-profile clients such as Kaczynski and Eric Rudolph, who bombed abortion clinics in the late 1990s and Atlanta’s Olympic park in 1996.

Earlier, Giffords’ wife Mark Kelly had released a statement saying that he and Giffords were fine with the plea deal. In the end, this seems like the best resolution for both sides as noted above. A trial would’ve taken years once appeals are taken into account, and even though Loughner was eventually ruled competent it’s not beyond the realm of possibility that he could’ve asserted a successful insanity defense (the standards for competence and legal insanity are very different). Loughner still faces the possibility of state charges for which the death penalty could be sought but, so far, no such charges have been filed.