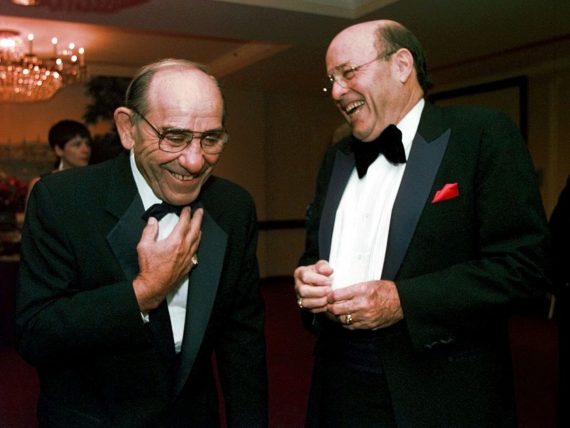 Joe Garagiola, a former baseball player who achieved more fame in front of the television camera than on the baseball diamond, died yesterday the age of 90:

Joe Garagiola, who spent nine forgettable seasons in the major leagues as a weak-hitting catcher and then parlayed his witty tales of life as a baseball underachiever into a far more notable career as a folksy broadcaster and television personality, died on Wednesday in Scottsdale, Ariz. He was 90.

Garagiola was propelled from the catcher’s box into the broadcast booth largely by his crowd-pleasing appearance before a United States Senate subcommittee on monopoly practices in April 1954. At the time, he was playing for the Chicago Cubs.

The committee chairman, Senator Edwin Johnson of Colorado, had sponsored a bill to make corporate ownership of baseball teams illegal and was targeting one of Garagiola’s former teams, the St. Louis Cardinals, who were owned by the Anheuser-Busch brewery.

Garagiola, who was near the end of his playing career, had been looking for a radio job in St. Louis. Because the advertising agency working on his behalf also represented the brewery, Johnson suggested that the Cardinals were guilty of “tampering” by improperly trying to lure him from the Cubs.

“Senator, how can you tamper with a .250 hitter?” Garagiola said.

His testimony, laced with the self-deprecation and irreverence that would become his trademarks, attracted enthusiastic press coverage and earned him a broadcasting job with the Cardinals.

He went on to be a colorful broadcaster for NBC, which also made him a host of the “Today” show and a game-show personality, always recognizable by his bald head and broad smile.

“The Baseball World of Joe Garagiola,” an NBC pregame show, won a Peabody Award in 1973. Garagiola was cited for a segment titled “The Hill,” in which “he returned to his old neighborhood in St. Louis for a warm portrait capturing with great fidelity a sense of time and place.”

He was later a broadcaster for the Yankees and the Arizona Diamondbacks.

Garagiola was inducted into the broadcasters’ wing of the Baseball Hall of Fame in 1991 as a recipient of the annual Ford C. Frick Award.

The longtime sportscaster Bob Wolff, who teamed with Garagiola on NBC, admired his style.

“He was a very erudite fellow,” Curt Smith quoted Wolff as saying in “Voices of the Game” (1987), a history of baseball broadcasting. “He’d bring new words to the booth. Instead of saying, ‘A runner almost slid into the shortstop,’ Joe’d say, ‘He almost stapled him to the bag.’ ”

During his playing days, Garagiola spoke at banquets and found he could make people laugh.

“I made a real effort to become a talk-for-pay guy,” he recalled in “Baseball Is a Funny Game,” his collection of anecdotes written in 1960 with Martin Quigley. “Every day I agitated Harry Caray, the St. Louis Cardinal broadcaster, about what a soft job he had. His answer was that if I could hit like I could talk, I wouldn’t have any worries.”

As he had done in his congressional testimony years before, he continued to find humor in his own foibles.

“Each year I don’t play, I get better,” he once observed. “The first year on the banquet trail, I was a former ballplayer, the second year I was great, the third year one of baseball’s stars, and just last year I was introduced as one of baseball’s immortals. The older I get, the more I realize that the worst break I had was playing.”

Joseph Henry Garagiola was born in St. Louis on Feb. 12, 1926, and was raised on the Hill, an Italian working-class neighborhood, where his father, Giovanni, was an immigrant laborer. His best friend and teammate on the makeshift ball fields was a boy who lived across the street, Yogi Berra.

Garagiola joined the Cardinals’ minor league system at 16 while Berra was starting out in the Yankees’ organization. Garagiola made his major league debut with the Cardinals in 1946 and batted .316 in their seven-game World Series victory over the Boston Red Sox that year, getting four hits in Game 4.

That proved the high point of Garagiola’s on-field career. He was traded to the lowly Pittsburgh Pirates during the 1951 season and, after a stint with the Cubs and a few games with the New York Giants, retired after the 1954 season, having played in only 676 games, with a career batting average of .257.

Garagiola had no experience in on-air work, but he felt that all those games when he was not in the lineup had prepared him well. As he told Curt Smith, “I used to sit in the bullpen and say, ‘Why the hell doesn’t he throw the curveball?’ Well, all I had to do to become an announcer was take out the ‘hell.’ ”

Garagiola was hired by the Cardinals’ flagship radio station, KMOX, when his playing days ended and teamed with Caray and Jack Buck. Garagiola was hired by NBC-TV in 1961 for its “Game of the Week,” joining Lindsey Nelson for one season and then working with Wolff. He later teamed with the former Yankee Tony Kubek and then Vin Scully, broadcasting regular-season games along with the playoffs and the World Series.

Garagiola replaced Mel Allen with the Yankees and was a member of their broadcast team from 1965 to 1967, along with Red Barber, Phil Rizzuto and Jerry Coleman. With Berra’s career as a Yankees catcher propelling him toward the Hall of Fame, Garagiola embellished his boyhood friend’s image with his tales of Yogi the Everyman philosopher.

Berra, who died in September, said that he came up with one of his better-known pronouncements, “When you come to a fork in the road, take it,” while giving Garagiola directions to his home in Montclair, N.J. There really was a fork near his house, and the roadways it split into both wound up at the Berra home.

Garagiola was a broadcast commentator for the Diamondbacks in his later years and retired from broadcasting in February 2013. His son Joe Garagiola Jr. was the general manager of the Diamondbacks and is now Major League Baseball’s senior vice president for standards and on-field operations.

Besides his son, the elder Garagiola is survived by his wife, Audrie; a daughter, Gina; another son, Steve; and eight grandchildren, according to Major League Baseball.

Garagiola had two stints as a host of NBC-TV’s “Today.” In the late 1960s and early ’70s, he worked with Barbara Walters, Hugh Downs and Frank McGee, and in the early 1990s he appeared with Katie Couric and Bryant Gumbel. Garagiola was also a host of TV game shows, including “To Tell the Truth” and “He Said, She Said.”

My recollections of Garagiola come mostly from his time as a baseball broadcaster and NBC host, and that would have been in the 1970s. At the time, though, it seemed as though he was one of those Hollywood personalities that showed up almost everywhere. I wasn’t aware until later, though, of his friendship with Yogi Berra or his time as a Yankees announcer in the 1960s.