One of the sillier memes trotted out in recent days is that John McCain’s campaign has been unusually dirty. Politico‘s David Mark and Avi Zenilman have asked the experts and learned otherwise.

David Axelrod, Barack Obama’s chief strategist, said Sunday that John McCain is running the “sleaziest and least honorable campaign in modern presidential campaign history.” It was a line trotted out all weekend by various Obama staffers as part of an effort to portray the Republican nominee as a purveyor of the slimiest tactics in recent memory.

Yet presidential historians and political scientists interviewed by Politico scoffed at the notion, suggesting McCain’s approach is no harsher than those used in previous modern campaigns and certainly not by comparison to many historic campaigns.

“The idea that this campaign is the sleaziest ever is absurd,” said David Greenberg, a professor of history and media studies at Rutgers who has written books on Presidents Coolidge and Nixon. “In fact, there’s been very little that’s below the belt, and aides have been fired on all sides when they’ve gotten near, let alone crossed, the lines. There’s nothing at all to rival the Swift-boating of Kerry in 2004, the imputations of un-Americanness to Dukakis in 1988, the anti-Catholic stuff against Al Smith in 1928 and the regular resort to slander and character assassination of so many 19th-century campaigns.”

That we’re even asking the question demonstrates that Team Obama has gotten traction with the charge. And, indeed, “Not History’s Sleaziest!” is hardly a winning message.

But, like so many of the charges and counter-charges in this cycle, the idea is simply absurd. The campaign has been particularly silly — a function of instant analysis and constant spin — but among the cleanest I can recall. Obama’s race and McCain’s war hero status both serve to put a lot of attacks out of bounds and require attacks, at least by principals, to be prefaced with nice words.

Has McCain’s campaign been more negative than Obama’s to date? It’s not clear to me how one keeps score but it does rather seem that way. Then again, that would be expected: McCain has been running from behind most of the contest and going negative is the time honored way to play catch-up.

Indeed, now that the polls show the race to be a dead heat, Team Obama has dumped the sunny talk of “hope” and gone aggressively on the offensive. That’s what campaigns do. They also whine a lot when the other side’s attacks gain traction. 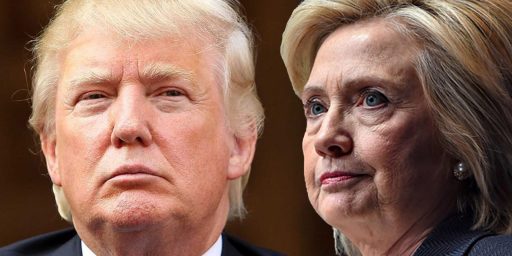