The NFL fined the team two draft picks and suspended the head coach a full year and the GM 8 games. 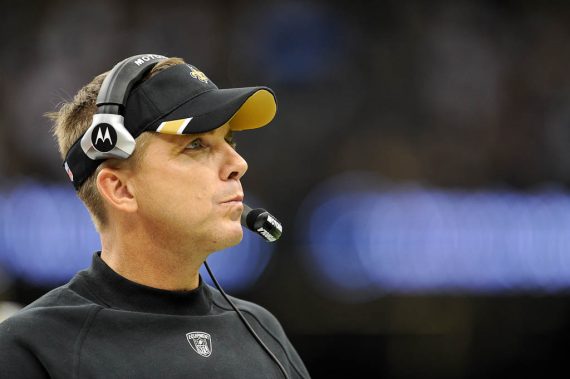 The New Orleans Saints received heavy penalties from the National Football League in punishment for years of rewarding players for injuring opponents.

The NFL came down hard on the New Orleans Saints on Wednesday.

Saints coach Sean Payton has been suspended for one year, former defensive coordinator Gregg Williams was suspended indefinitely, general manager Mickey Loomis was suspended for the first eight regular-season games, the team was fined $500,000 and lost two second-round draft picks (one in 2012 and ’13) as a result of a bounty program conducted by the team during the 2009-11 seasons.

Saints assistant coach Joe Vitt also was suspended six games and fined $100,000. The NFL said in its statement that the suspensions for Payton, Loomis and Vitt are without pay.

Payton’s suspension is effective April 1. Commissioner Roger Goodell will meet with Williams after the 2012 season and determine the coach’s status.

“We are all accountable and responsible for player health and safety and the integrity of the game,” Goodell said in a statement announcing the punishments. “We will not tolerate conduct or a culture that undermines those priorities. No one is above the game or the rules that govern it. Respect for the game and the people who participate in it will not be compromised. “A combination of elements made this matter particularly unusual and egregious,” Goodell said. “When there is targeting of players for injury and cash rewards over a three-year period, the involvement of the coaching staff, and three years of denials and willful disrespect of the rules, a strong and lasting message must be sent that such conduct is totally unacceptable and has no place in the game.”

Contrast this with the penalties handed down for the Spygate controversy:

Goodell fined the New England Patriots $250,000 and their coach, Bill Belichick, $500,000 for the Spygate scandal in 2007, when the team was caught illegally videotaping the Jets’ sideline. New England also was stripped of a first-round draft pick.

That Williams, a serial offender and the ringleader here, got an indefinite suspension is the right move here. Most were predicting a year but the actions were flagrant and over the course of many years and many teams.

Most thought Payton would just get four games, so missing an entire season is brutal. Then again, four games is what the League assesses against players for violating the drug policy. A full season sends a very strong message, indeed.

By contrast, a measly two second round picks strikes me as light. My guess is that Goodell would have confiscated their 1st rounder if they hadn’t already traded it away (ironically enough, to the Patriots). Still, a 2nd this year and next year’s 1st would have been a stronger message.

Similarly, a $500,000 fine for the team is rather light. To be sure, the available evidence is that the owner knew nothing about the bounties and ordered them stopped once he found out. But the same was true in Spygate and the team got $250,000. Considering individual players get fines of $25,000 or $50,000 for an illegal hit–often one rendered illegal only by the vagaries of the opponent changing body positions before impact–it sends a weak signal charging so little to a billionaire owner.