Another chapter in the annals of American Politicians as Royalty: 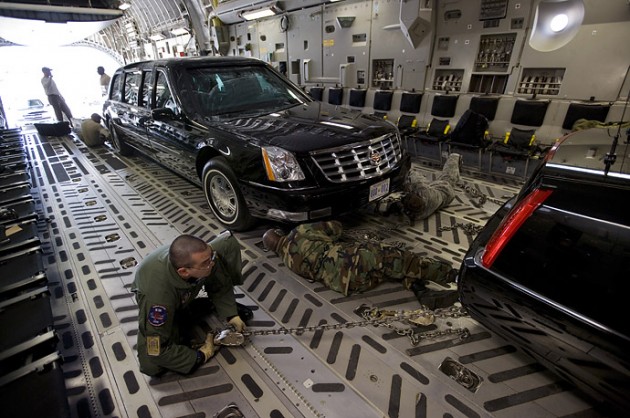 Another chapter in the annals of American Politicians as Royalty:

The five medium-capacity C-130s and four heavyweight C-17s will be used to ferry security vehicles, armored limousines and communications gear into cities ahead of Obama’s campaign appearances.

In the months before November, the president is expected to fly into multiple cities per week, and speak at multiple sites per day. On Mar. 8, for example, the president will fly to Richmond, and then drive over to a Rolls-Royce aircraft-parts factory. That evening, he’ll fly down to Houston, Texas.

His wife, Vice President Joe Biden and many of his cabinet secretaries are using the Air Force’s fleet of VIP aircraft to visit more states as the election season speeds up.

The squadrons will supplement the existing fleet of VIP passenger aircraft at Andrews. Those aircraft include two giant Boeing 747s — which are tagged Air Force One while they’re carrying the president — as well as five Boeing 757 wide-body passenger jets, and 11 Gulfstream executive jets.

Those passenger aircraft are already helping shuttling cabinet secretaries to their election-related events, many of which are in critical swing-states.

The only references to this story I’m finding thus far are at partisan sites. But this isn’t a partisan issue or a matter of President Obama doing anything untoward. Even the Caller story notes, several paragraphs in, “The Air Force allocated extra aircraft to support President George W. Bush when he was running for re-election in 2004.”

On the one hand, this does seem an unseemly practice. The taxpayer shouldn’t be expected to bear these extraordinary cost of the president’s re-election campaign. And that’s doubly true of various administration officials being ferried around on military planes; at least the president is in the chain of command. On the other hand, I’m not sure what to do about it, at least in the case of the president and his family. While we’ve gone overboard in creating a security wall around the First Family, we’ve had enough presidential assassination attempts–too many of them successful–in our history to pretend that there aren’t legitimate concerns.

As a matter of propriety, presidents ought not go on campaign junkets on the taxpayer. As a matter of practicality, pretty much anything a first term president does–particularly in the last year of that term–is political, so drawing the line is next to impossible. Still, it’s hard to justify flying various officials, along with their entourages and limos, around the country in military transport planes.