The front page of Sunday's NYT profiled Valerie Jarrett, the power behind the throne at the Obama White House. 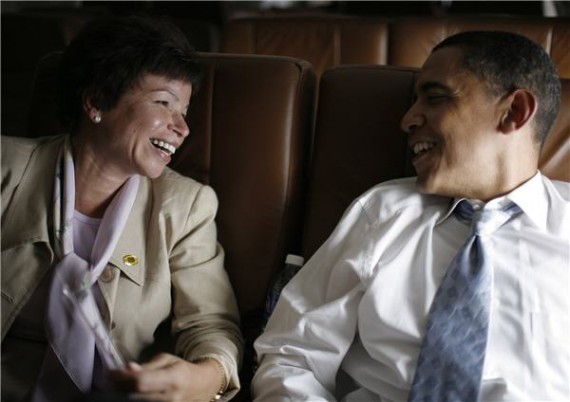 The front page of Sunday’s NYT profiled Valerie Jarrett, the power behind the throne at the Obama White House.

A Chicagoan who helped Mr. Obama navigate his rise through that city’s aggressive politics, Ms. Jarrett came to Washington with no national experience. But her unmatched access to the Obamas has made her a driving force in some of the most significant domestic policy decisions of the president’s first term, her persuasive power only amplified by Mr. Obama’s insular management style.

From the first, her official job has been somewhat vague. But nearly four years on, with Mr. Obama poised to accept his party’s renomination this week, her standing is clear, to her many admirers and detractors alike. “She is the single most influential person in the Obama White House,” said one former senior White House official, who like many would speak candidly only on condition of anonymity.

“She’s there to try to promote what she understands to be what the president wants,” the former aide said. “Ultimately the president makes his own decisions. The question that is hard to get inside of, the black box, is whether she is really influencing him or merely executing decisions he’s made. That’s like asking, ‘Is the light on in the refrigerator when the door is closed?’ ”

Yet if that answer remains elusive, interviews with more than two dozen former and current administration officials offer a portrait of a woman wielding a many-faceted portfolio of power.

Partly it is her ubiquity, the guiding hand in everything from who sits on the Supreme Court to who sits next to whom at state dinners, the White House staff memos peppered with “VJ thinks” or “VJ says.” When the billionaire investor Warren E. Buffett showed up for a private lunch with the president last July, the table was set for three.

Ms. Jarrett often serves as a counterweight to the more centrist Clinton veterans in the administration, reminding them and her innately cautious boss that he came to Washington to do big things. Some of his boldest moves, on women’s issues, gay rights and immigration, have been in areas she cares about most. If Karl Rove was known as George W. Bush’s political brain, Ms. Jarrett is Mr. Obama’s spine.

She is also his gatekeeper, sometimes using that power to tip the balance in internal debates. After the financial crisis, as the administration grappled with how to rein in Wall Street, Ms. Jarrett made sure that Paul A. Volcker, a former Federal Reserve chairman whose voice was being drowned out, got a meeting with the president. The result: tougher measures than the president’s top economic advisers were advocating.

And she is the president’s protector in chief, or as Treasury Secretary Timothy F. Geithner put it, the person who must be as “omniscient as possible” in spotting trouble on the way. Those whom she deems to have failed Mr. Obama tell of scolding late-night calls and her trademark accusation of betrayal: “You are hurting the president.”

But she has also steered him toward controversy, as in the contraception debate. And some of Mr. Obama’s most senior advisers worry — perhaps not entirely without jealousy — that her direct access to the president has at times led to half-baked decision making and unclear lines of authority.

Mr. Obama’s first two chiefs of staff, Rahm Emanuel and Mr. Daley, clashed with Ms. Jarrett over strategic direction and over who had greater authority to interpret and carry out the president’s wishes, several officials said.

“He’s got a real mess in the West Wing,” said one close presidential adviser. “Valerie is effectively the chief of staff, and he knows, but he doesn’t know. She’s almost like Nancy Reagan was with President Reagan, but more powerful.”

There’s a certain amateurism at work here but I’m afraid it goes with the territory. With the possible exceptions of former vice presidents, a new president takes office with no real experience in how the White House works and assembles the entire team from scratch. Typically, he chooses from long-time lieutenants who are loyal to whom and with whom he’s comfortable and those who held positions in government the last time his party held the presidency. There’s no continuity, no institutional memory, and no formal hierarchy such that exists in almost any other powerful organization.

Having a single advisor with this much power, especially if it’s based mostly on a personal relationship with the president, is almost certainly a bad idea. It makes it harder for the best advice to reach the boss’ ear and plays havoc with institutional hierarchy. And, in effect, that person becomes something of a shadow president, effectively making policy decisions that the president should rightly be making, quite often without the president even knowing about it.  This sort of thing, happens in most organizations, but it’s especially likely in a White House because everyone there serves at the pleasure of the president.

It is, however, the norm rather than the exception.

As a theoretical matter, the White House chief of staff runs the day-to-day operation of the Executive Office. Usually, but not always, this person has a long-time connection to the president and is among his most trusted advisors. Probably the best example was Hamilton Jordan, who was Jimmy Carter’s most trusted advisor.

Regardless, it’s quite typical for some person with no formal role or with a murky role in the cabinet or staff to be the most influential person on the team. For George W. Bush, it was Karl Rove, who was merely a “senior advisor to the president” in the first term and deputy chief of staff in the second. (Dick Cheney, the vice president, obviously played a very powerful role as well, especially in foreign policy.) For Bill Clinton and Ronald Reagan, it was rather clearly their wives who had their ear. For John Kennedy, it was his brother, the attorney general. 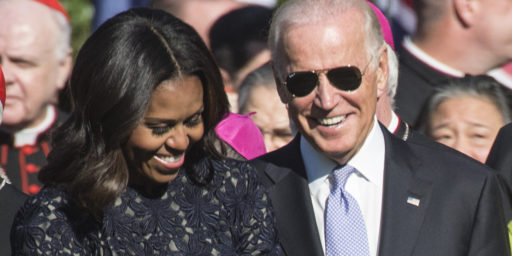