Beginning with "BREAKING: Witnesses reporting screams and gunfire heard inside Capitol building," a series of tweets with the #CongressHostage hashtag have been decidedly unfunny.

Twitter is abuzz this morning by a series of bizarre tweets from The Onion: 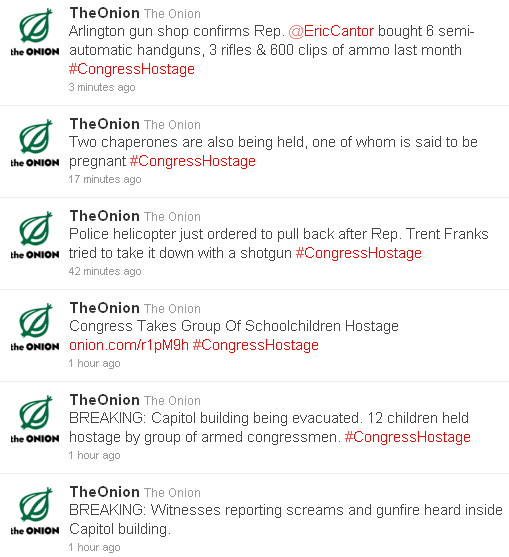 Beginning with “BREAKING: Witnesses reporting screams and gunfire heard inside Capitol building,” a series of tweets with the #CongressHostage hashtag has flummoxed followers. The follow-ups were, well, equally unfunny:

If this is supposed to be a parody of something . . . I’m not getting it.

Patrick Thornton thinks he gets it: “Today we’re seeing @theonion at its blinding finest. We are being held hostage by Congress. That’s the joke. #CongressHostage.” Well . . . okay. Still not funny.

And it’s not just the Twitter account. There’s an actual story (“Congress Takes Group Of Schoolchildren Hostage“) to go along with it.

Brandishing shotguns and semiautomatic pistols, members of the 112th U.S. Congress took a class of visiting schoolchildren hostage this morning, barricading themselves inside the Capitol rotunda, where they remain at press time.

House Speaker John Boehner (R-OH), who has emerged as spokesman for the bipartisan group, informed FBI negotiators that the legislative body’s demands would be issued within the next hour, and that if any attempt is made to stage a rescue “all the kids will die.”

“At this time, we are waiting for more information and to see what the U.S. Congress’s demands might be,” Special Agent Douglas Burkett of the FBI Crisis Negotiation Unit said. “In the meantime, we have snipers on the Supreme Court building, the Ulysses S. Grant Memorial, and the National Museum of the American Indian, but so far none of them has been able to get a clear shot at any senators or representatives.”

“While there’s an assault team on the way, they won’t be able to breach the door if members of Congress have rigged the place with explosives,” Burkett added. “And that’s quite possible. From the looks of things, I’d say they’ve been planning this for a while.”

There’s more but it doesn’t get any funnier.

Update (Doug Mataconis): The Capitol Hill Police are not amused:

The tweets came the day after a Massachusetts man was arrested for allegedly plotting to blow up the Capitol and the Pentagon.

The Capitol Police were quick to address the rumors, issuing a statement that “It has come to our attention that recent Twitter feeds are reporting false information concerning current conditions at the U.S. Capitol.”

A spokesman for The Onion told the Washington Post: “This is satire. That’s how it works.”