The Cock-a-Doodle Do It My Way Edition OTB Caption ContestTM is now over.

The Cock-a-Doodle Do It My Way Edition OTB Caption ContestTM is now over. 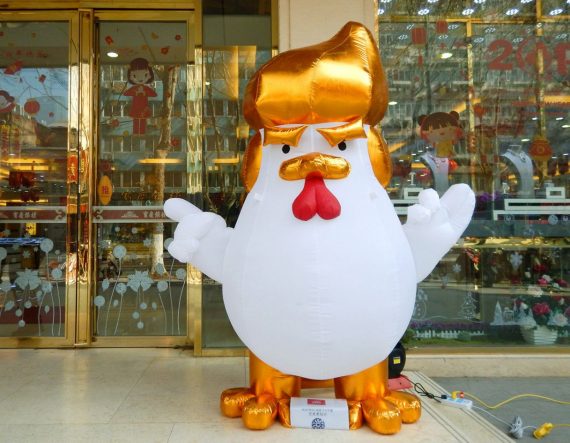 Second: Moosebreath – The 2016 election was the people saying a giant “Cluck You” to the elites. Now the chickens are coming home to roost.

DrDaveT – “Finger lickin’ good” just ain’t the same when the fingers are so dang short.

john430 – China may have second thoughts about celebrating The Year of The Rooster with this political turkey.

bill – It’s so great for white people to be able to joke about the president after 8 yrs.

Mu – After losing the election, Hilary Clinton became a greeter at Chicks r’ us

barbintheboonies – Just give me enough to wet my beak.

…as China and U.S. Politicians are already aware… This IS the year of the Cock.

Why did the Chicken cross the road? and Congress? and the Senate? and the Democrats? and Women? and refugees? and illegal immigrants? and China, and the UN? and Nato? and it’s closest allies and….

Trump nearly stood up to the Vicious Chicken of Bristol.

(Ceelo Green Reprise)
♬
I see you clucking ’round town,
with the breakfast I love,
And I’m like fry you.
I guess that big bunch waffles just wasn’t enough,
I’m like fry you and a dozen eggs too.
With butter it’s richer, and large cream pitcher,
Big as a ship (Chorus: Ain’t that some ship)
With a cloggin’ pain in my chest,
I’ll whisk up some eggs next,
just to fry you… (Chorus: ooh ooh ooh)
♬