Enter the Weblog. Better than a static links list (because it’s a living resource) and more useful than a What’s Cool page (because coolness stopped meaning much when everyone became a Photoshop pro), the Weblog is in Net terms a relatively recent development (“Weblog” was coined by Jorn Barger on his Robot Wisdom site in late 1997). With the notable exception of Slashdot, Weblogs are almost always the work of one person. And though it may not appear to be much more than a regularly updated, annotated list of links, the blog (a contraction coined by information-design Weblogger Peter Merholz) has become a new kind of Internet filter: what really makes one valuable is the combination of frequency, timeliness, and editorializing that coalesces around the blogger’s voice. I visit several sites almost daily because I’ve come to trust the insight and value the persistence of the blogger in finding the most interesting things out there.

It’s amazing both how new this all is and, simultaneously, that it’s been around almost six years. Think of all the recent mass media coverage that still has to define what a blog is and how many people still have never heard of them, let alone read them.

The closer is a hoot, given how wrong it is:

Jason Kottke, general-interest blogger, explains the natural Epinions-Weblog attraction this way: “Many Weblogs revolve around commenting on items that the authors come into contact with as a part of their day. Moving that content off of the Weblog and getting paid for it — look Ma, I’m a professional writer! — is almost a no-brainer.”

That’s right: getting paid. Epinions’s success will depend in no small part on its members’ frequent and consistent contributions. Working on the assumption that the adoration of one’s peers isn’t enough of a motivating factor for most of us, Epinions pays each member a very small amount of money, equaling pennies per pageview, every time his “epinion” is read by another member.

Webloggers learned some time ago that opinions are currency — that’s half of their success. And yet it’s strange to think of these independent watchdogs of the Net community, which has traditionally been so hostile to the Net’s commercialization, diving into Epinions with such gusto. Could it be, contradicting the old Net slogan, that information (or at least opinion) doesn’t want to be free after all? Or maybe bloggers just know a good idea when one finally comes around.

With the exception of Andrew Sullivan and maybe Glenn Reynolds, blogging hasn’t exactly caught on as a ticket to riches. Indeed, witness den Beste’s lament that he’s paying $200 a month or Andrea Harris’ and Markos ZÃƒºniga’s concerns about the bandwidth dilemmas they’re having. This is still a hobby for virtually all of us. 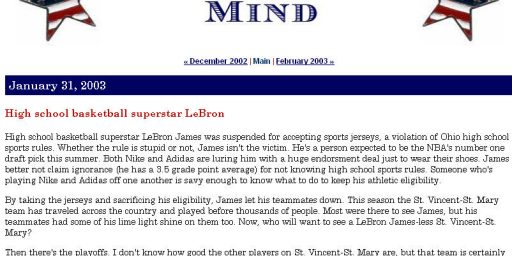