As many of you may already know, last night just about a half hour before midnight, NASA launched a rocket from its facility on the Eastern Shore of Virginia carrying a probe headed for  the Moon to conduct experiments related to its (minimal) atmosphere and the movement of Lunar dust. Thanks to the weather, it was a clear night throughout much of the East Coast so those who were lucky enough to find a good viewing spot were able to see it race through the sky.

Here’s a photo taken from the top of 30 Rockefeller Plaza that has been making its rounds on Twitter and Facebook today: 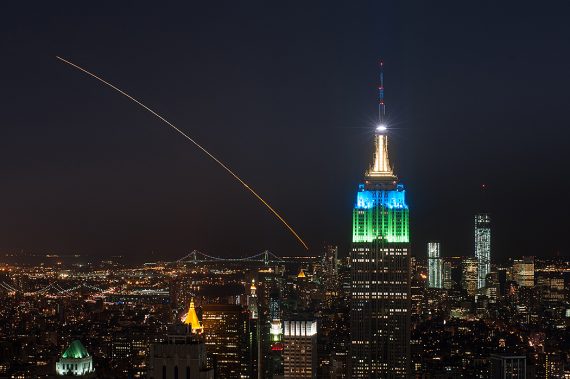 Sadly, I must report that yours truly was not able to see the launch. A combination of a long week, and the fact that finding an unobstructed view to the East would’ve required bit of driving unfortunately.

The probe will arrive at the Moon in early October.