President Trump announced a goal of returning American astronauts to the Moon, but that's easier said than done. 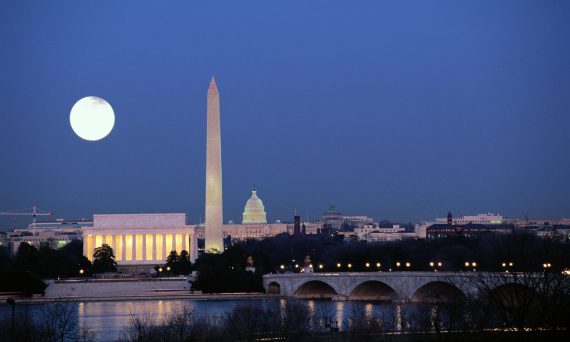 President Trump has signed on to a new NASA directive that makes a return to the Moon the next step in America’s manned space program:

President Trump announced on Monday that the moon would be the next destination for American astronauts, putting the Oval Office’s imprimatur on what other administration officials have said for months.

“It marks a first step in returning American astronauts to the moon for the first time since 1972, for long-term exploration and use,” Mr. Trump said during a brief ceremony at the White House, where he signed what the White House called Space Policy Directive 1.

“This time, we will not only plant our flag and leave our footprints,” Mr. Trump said. “We will establish a foundation for an eventual mission to Mars, and perhaps someday, to many worlds beyond.”

Attendees included Harrison Schmitt, one of the astronauts on Apollo 17, the last piloted mission to the moon.

“Today we pledge he will not be the last,” Mr. Trump said.

The directive, which came on the 45th anniversary of Apollo 17’s landing on the moon, calls for collaboration with commercial companies and other nations, but it did not specify when the moon mission would occur or how much it might cost.

These details may emerge in February when the administration’s proposal for fiscal year 2019 is released.

Vice President Mike Pence made a similar announcement in October at the first meeting of the National Space Council, which is to coordinate space policy across various federal agencies.

Mr. Trump’s announcement essentially revives goals that President George W. Bush announced in 2004. The resulting NASA program, Constellation, was to put astronauts on the moon by 2020 but was hobbled by delays and cost overruns.

President Obama canceled it in 2010 and instead told NASA to focus on reaching an asteroid in the 2020s and then Mars in the 2030s.

The new heavy-lift rocket that NASA is developing for deep-space missions — known as the Space Launch System — could serve as a core component of a moon trip. But the first uncrewed test of that rocket will not occur until 2019 or 2020, and the first flight carrying astronauts would follow several years later.

Announcing a return to the Moon is easier said than done, of course, and Christian Davenport at The Washington Post discusses some of the lingering questions that surround all of this:

[P]residents have promised Apollo-like ambitions for generations, and Trump is now the third consecutive Republican president to vow a return to the moon. Both George H.W. Bush and George W. Bush gave lofty speeches about space exploration, and President Barack Obama promised a “journey to Mars.” But a lack of funding and a clear, sustained direction has hampered those efforts, for decades preventing any human exploration beyond low Earth orbit.

While Trump offered scant specifics about how NASA would return to the moon, or how much such an endeavor would cost, the difference this time is that his administration would attempt to leverage the growing private sector for the mission. In addition to Moon Express, several commercial companies, including the United Launch Alliance, SpaceX and Blue Origin, have announced plans to return to the moon. (Blue Origin’s founder Jeff Bezos owns The Washington Post.)

“This is very different than what happened in previous major space efforts where it was really just governments,” said Scott Pace, the executive secretary of the National Space Council. “We want U.S. industry to be leading, and we want to do it with our international partners.”

Some think they will be the key that could give Trump a space triumph.

“For all of this goal-setting, the real test of Trump administration’s space plan is simple: is it a giveaway to special interests, or an actual space strategy that will push us ahead,” said Phil Larson, an assistant dean at the University of Colorado Boulder’s college of engineering. “We don’t know the answer to that yet. But we do know a commercially led approach is the best deal for U.S. taxpayers. The moon is great, but the plans and partnerships matter more than dates and destinations.”

So far at least, there is no timetable set for the goals that Trump announced yesterday, and it’s likely to be some time before even a preliminary one is put forward. As noted, the first tests of the launch vehicle that would be used to get astronauts to the Moon and beyond won’t even be held for another three years. Even assuming that stays on schedule, it would be several more after that before the first manned launch would take place, and that’s likely to involve missions that would take astronauts into higher Earth orbit. After that, things would likely proceed much as they did with the Apollo missions, with at least a few missions aimed at just getting to the Moon. Given all of that, it would likely be the late 2020s at the earliest before we’d see the first return manned Moon mission would most likely not take place until the late 2020s at the earliest, and that’s assuming adequate funding and no setbacks in the program itself. If one or both of those doesn’t hold true, then it might not happen until the 2030s, and any permanent presence on the Moon such as Trump’s announcement seems to anticipate would be years beyond that at best. All of this to accomplish something that we’ve already done.

While I suppose that it’s important to have a manned space program and to move that program forward, I’m not at all sure that this is the best use of our resources in this regard. Potentially, returning to the Moon could be a worthwhile goal if it were just the first step in a longer-term goal of using that presence to take astronauts a step further with something such as a mission to a nearby asteroid or, more ambitiously to Mars. Instead, all this appears to be is a plan to have a plan to, well, do something that we know we already know we can do, namely get astronauts to the Moon and bring them back safely. What value there is in that, though, is something I’m not at all sure about. Additionally, setting a policy goal is far different from actually carrying it out. Presidents Bush and Obama both set policy goals of their own and never really followed through on recommending or fighting for a budget for NASA that would have even come close to giving them the resources they need to realistically reach the goals that were set forth in that policy. There’s no indication that things would be any different with Trump, and while there are some aspects of a mission like this that can be done in conjunction with private space launch companies like SpaceX, in the end it would require a significant commitment by the Federal Government for the goal to be achieved. That’s unlikely to happen.

Moreover, as I’ve argued numerous times before, manned missions are hardly the best use of our resources at this point in time. While manned space flight has been limited for the past fifteen years or more to missions to the International Space Station, our unmanned program has proceeded forward and made tremendous scientific breakthroughs. This includes not only missions that have taken us to planets such as Mars, Saturn, and Pluto and also led to orbiting such as the Hubble Space Telescope and other satellites that have allowed us to see to the edge of the universe and find planets orbiting both nearby and distant stars, many of which have been found to exist within the so-called “Goldilocks Zone” where it’s believed planets capable of supporting life would need to exist. Future missions will expand on that research and could lead to the first confirmation of planets that contain atmospheres similar to our own where life might be found. None of this is realistically within the reach of manned space flight at this point, and it’s likely to be a long time before we can even think about sending men to such locations. More importantly, these unmanned missions cost a fraction of what manned missions would cost. Rather than setting unrealistic goals for a manned program, it would be more worthwhile to invest money in these programs than to spend it doing something we already know we can do like get to the Moon.