A space shuttle lifted off for the last time on Friday, and some people seem to think its the beginning of the end of America. 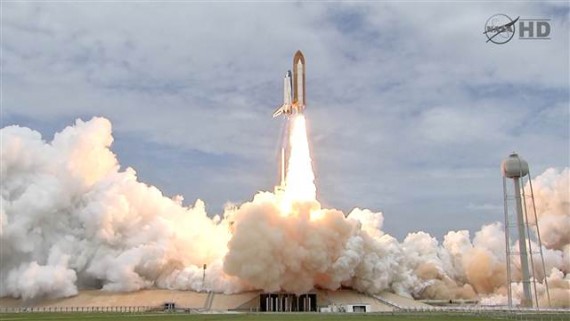 Last Friday, the Space Shuttle Atlantis lifted-off for what will be the final flight of America’s space shuttle, a program that was in the planning stages while we were still sending men to the moon, and which never really lived up to the hype that surrounded it when Columbia first blasted off in 1981. In addition to nostalgia, though, the launch of Atlantis has also been accompanied by assertions from some that the end, at least for now, of America’s manned space flight program is somehow a crisis for the nation:

In the wake of NASA’s final shuttle launch Friday morning with the space shuttle Atlantis, many critics are expressing doubt over NASA’s future now that the 30 year shuttle program has come to an end.

“If God had meant for us to travel into deep space, he would have given us more money,” says space expert John Pike of globalsecurity.org.

Pike, a bespectacled, bearded self-described “space cadet” who is known for the rare qualities of being able to decipher both space science and Washington politics, is deeply pessimistic about the future of NASA and the loss of America’s pioneering spirit. “Americans are a pioneering people,” he said.

“For four centuries we were pioneering the horizontal frontier of the west, at the beginning of the 20th century we started to pioneer the vertical frontier and that took us from Kitty Hawk to Tranquility Base. I think that the piloted space flight program is about the American myth and without human space flight I think that the country would be impoverished and we’d really have to reexamine what it is to be Americans.”

Over at National Review, Michael Auslin asserted that abandoning manned space flight means that we are abandoning ourselves to mediocrity:

Today, the 135th and final shuttle mission launched from Cape Canaveral. It marked not only the end of the expensive and limited space shuttle program, but the end of America’s manned space program. With Barack Obama canceling the Constellation Program last year, America has ended exactly 50 years of manned space flight, stretching back to Alan Shepard’s May 5, 1961 sub-orbital flight in Freedom 7. That half-century witnessed the triumph of American technological and industrial progress, including the capstone Apollo program.

Yet stop for a moment and consider that between Alan Shepard and the space shuttle, just two decades passed. From the very first steps at manned flight to landing on the moon to the concept of the reusable orbiter took only 20 years Since Columbia’s first flight in 1981, exactly thirty years, there have been no breakthroughs in manned space flight. And now, America has retired from the manned space game.

There’s no question the manned space program has been extraordinarily expensive and in many cases wasteful.

Societies do not thrive when restricted by government regulation or a lack of leadership to tackle new challenges. They thrive when scientists, entrepreneurs, and ordinary citizens have a sense that the new and unknown is within their grasp, and when they are encouraged to reach to the stars. Waste and mistakes occur all the time, but there is a fundamental difference between spending money to pay back political supporters and spending money to push the boundaries of human knowledge and achievement. NASA may need to be rebuilt from the ground up, but surrendering the dream of manned exploration of space is certain to bring only a further sense that under this president, America is eager only to embrace mediocrity and a poverty of human spirit.

And on Capitol Hill, Senator Marco Rubio, who is of course from Florida where the space program has been a huge employer over the years, asserted that the space program was a 21st Century equivalent of American Manifest Destiny:

“Whereas America once led the way to the moon, we now face the unacceptable prospect of limited options to simply get a human into orbit,” he continued. “We know that our commercial space partners are working to fill some of the gap in our human space flight capabilities, and that is a promising development that we should encourage. But we need NASA to lead.”

“When America was born 235 years ago, surely our founding fathers could not fathom that one day our people would fly amongst the stars,” he said. “But the truth is it has always been our destiny. In the 19th century, it became our manifest destiny to explore and push westward until the American land stretched from sea to shining sea. And once we reached as far west as we could, Americans had no choice but to gaze up to the sky and settle on the stars as our next frontier.”

Of course, what Rubio forgets here is that part of that history involved he U.S. going across the sea and annexing new territories against the will of their inhabitants. Is that what Rubio sees us doing if we make it Proxmia Centauri and find intelligent life there? Does he see us taking a planet and just running roughshod over whatever we find there the way Americans did as they made their way west in the 19th Century? The truth, of course, is that what Rubio really sees are the dollar signs of the money that would come to Florida from a renewed manned space flight program. There’s nothing wrong with that, of course. As a Senator from Florida it’s Rubio’s job to act in the interest of his state. Nonetheless, trying to frame it in the language of manifest destiny strikes me as more than just a little absurd.

As for Auslin’s argument, it is so bound up with nostalgia for an era that ended a long time ago that he really has no understanding of just how worthless the shuttle program had become by the time NASA officially announced that it was ending. When the Shuttle program was first announced, NASA’s plans for it were ambitious.  More importantly, as Tim Sandefur puts it, the idea that America requires an expensive manned space flight program for it’s “national greatness” is just absurd:

What it means to be an American is infinitely better represented by Space Ship One than by a bureaucratic machine that is in many ways stuck in the 60s–and that takes money by force from people who would much rather spend it supporting themselves and their families than paying astronauts to ratchet down solar panels in free fall. Space exploration is very cool, but its civilian benefits are vastly exaggerated; it’s a big government corporate welfare scheme—not an essential principle of my Americanness.

Exactly. Would it be cool to spend billions of dollars that we don’t have to send men to Mars? Most assuredly it would, but what, exactly would we have accomplished. It’s been nearly 40 years since we last set foot on the moon and the manned space flight program has been stuck orbiting the planet over and over and over again. Our unamned program, meanwhile, has sent probes to Mars, the outer planets, a comet, and, most recently Mercury.  Three probes that we launched in the 1970s — Pioneer 10 and Voyagers I and II — have traveled further than any other manned made object in human history and are still sending back data as the plunge into the unknown world of interstellar space. At our current rate of development, it will be centuries before human begins can accomplish anything similar to what our machines have been able to do for us.Wouldn’t it make more sense to invest money in this method of exploration while trying to find faster, cheaper methods of propulsion ?

Additionally, we are the point now where its time to consider the possibility that government may not be the best institution for finding and exploiting the next advances in manned space flight:

Since we won the first Space Race, people just aren’t interested in sending unmanned probes to Mars or astronauts up to the ISS. They want laser cannons and X-Wings, or at the very least, a manned mission to Mars or a space elevator. With decreased public interest, there is also less willingness to pay. I’ve spoken to more than a few people who are astonished that we pay millions to send people into orbit when there are a multitude of problems down on Earth they think we should be focusing on. I think that feeling is probably pretty commonplace, and thanks to that, nearly all space exploration in the United States is hamstrung, since politicians avoid that topic and focus on other things.

That’s why the free market can work—let the people who truly care about space exploration give their money and resources freely to the cause, while others who are less interested save their money and resources for other things they support. It’s a basic, win-win scenario, and the space industry is one of the areas where private enterprise has been really outperforming the government, and doing it publicly. The Ansari X Prize raised the bar for private and relatively cheap spaceflight, generating a ton of interest and introducing commerical astronauts to our world. Its sequel, the Google Lunar X Prize, is still on track to have private groups (not necessarily for-profits) put an unmanned lander on the Moon by 2015. Richard Branson, of course, is still pushing forward with Virgin Galactic, with over 300 wealthy tourists already signed up for its $200,000 jaunts; according to the Fédération Aéronautique Internationale, only 517 people total have been to space, so Branson will dramatically increase the astronaut population, in a way that NASA could only dream of. (And there are a lot of competitors trying to work out suborbital tourism, too.) Bigelow Aerospace—my personal favorite—has not one, but two space stations in orbit, both of which happen to be inflatable. (That’s right, we don’t need to go through super-expensive time consuming module construction, we just inflate a space station now. Available at your local Home Depot for 25% off.) And finally, there’s the darling of the space news media—SpaceX, founded by Pay Pal co-founder Elon Musk, and which recently received a $3 billion contract from NASA to launch “satellites and potentially astronauts into space.” (Naturally, the story worries that they may be “cutting corners,” but from the non-Euclidean mess that is government spaceflight, there are probably a ton of corners to be cut.)

Private space launches are the next big thing, and they’re far more likely than a government program to be innovative, and to find answers to questions that we can’t even think of right now. As we retire the final shuttle after Atlantis lands, its worth noting that it was a program designed in the 1970s, updated to some extent during the 1980s, and that technology has changed dramatically in the years since the first shuttle was launched. Government couldn’t adapt to those changes easily, but private industry can. Let’s give them a chance to try.

One thing to keep in mind is that this isn’t the first time that the United States will have taken a break from manned space flight. There was not a single American manned space flight from the 1975 Apollo-Soyuz mission  until Columbia’s first flight in 1981. Six years without an American in space, while the Russians continued to shoot Soyuz capsules into orbit. And we survived as a nation. Something tells me we’ll be fine this time too.