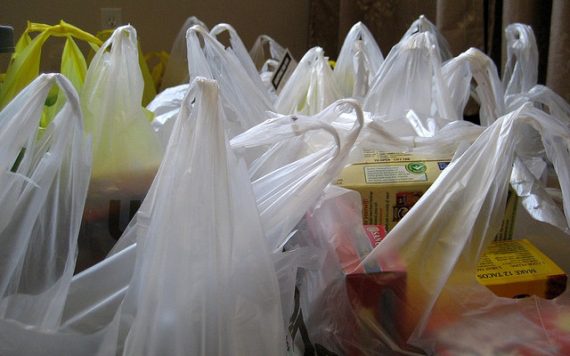 [T]he industry has highlighted news reports linking reusable shopping bags to the spread of disease. Like this one, from the Los Angeles Times last May: “A reusable grocery bag left in a hotel bathroom caused an outbreak of norovirus-induced diarrhea and nausea that struck nine of 13 members of a girls’ soccer team in October, Oregon researchers reported Wednesday.” The norovirus may not have political clout, but evidently it, too, is rooting against plastic bags.

Warning of disease may seem like an over-the-top scare tactic, but research suggests there’s more than anecdote behind this industry talking point. In a 2011 study, four researchers examined reusable bags in California and Arizona and found that 51 percent of them contained coliform bacteria. The problem appears to be the habits of the reusers. Seventy-five percent said they keep meat and vegetables in the same bag. When bags were stored in hot car trunks for two hours, the bacteria grew tenfold.

That study also found, happily, that washing the bags eliminated 99.9 percent of the bacteria. It undercut even that good news, though, by finding that 97 percent of people reported that they never wash their bags.

Jonathan Klick and Joshua Wright, who are law professors at the University of Pennsylvania and George Mason University, respectively, have done a more recent study on the public-health impact of plastic-bag bans. They find that emergency-room admissions related to E. coli infections increased in San Francisco after the ban. (Nearby counties did not show this increase.) And this effect showed up as soon as the ban was implemented. (“There is a clear discontinuity at the time of adoption.”) The San Francisco ban was also associated with increases in salmonella and other bacterial infections. Similar effects were found in other California towns that adopted such laws.

I find reusable bags convenient for all manner of things but don’t use them for groceries. And I’ve got enough sense to launder them if something spills in them. But I’m not at all surprised that most people don’t; it’s pretty low on the priority list.

I’m old enough to remember the days before plastic bags became common and groceries came in brown paper sacks. We got pushed to use the less desirable plastic bags because of all the trees that had to be harvested to make the paper variety. For years, we’d get asked “Paper or plastic?” at checkout. Then, they stopped asking.  Now, some stores are asking again, although usually in the form, “Plastic okay?” I wouldn’t be shocked if we came full circle and saw the revival of brown paper bags.