Shocking news:  All the major polls show that Barack Obama won the third debate, just as they showed that he won the first two and Joe Biden won the VP debate.  Between the liberal media conspiracy and the fact that Obama and Biden are better debators than McCain and Palin, it’s not even fair.

At any rate, the numbers.  Bold text all added for emphasis.

The poll also suggests that debate watchers’ favorable opinion of Obama rose slightly during the debate, from 63 percent at the start to 66 percent at the end. The poll indicates that McCain’s favorables dropped slightly, from 51 percent to 49 percent.

Politico had the best news for Mccain:

Voters are closely divided over which presidential candidate won the third and final general election presidential debate, according to an exclusive Politico/InsiderAdvantage nationwide survey of undecided debate-watchers.

Forty-nine percent of respondents said that Obama won the debate, compared to 46 who believed his opponent, Sen. John McCain, came out on top. The three-point gap separating the two candidates was equal to the poll’s margin of error. Five percent said they were unsure which candidate had the better evening.

Perhaps the best news for McCain is the rating he received from independent voters. Among respondents not identified with either major political party, McCain was judged tonight’s winner, 51-42 percent.

Obama’s most important lead may have come among Hispanic voters, who said he bested McCain by a 50-36 percent margin. The candidates were evenly matched among white voters, with McCain posting a narrow 49-46 percent advantage. African-Americans picked Obama as the winner, 88-10

I should note that that’s white undecideds.  All the general polls show McCain winning whites.

Overall, mostly good news for Obama:  People like him, trust him, and think he shares their values.   McCain, who has enjoyed very high favorables throughout his career, has clearly damaged himself by going on the attack, especially with dubious charges that don’t seem believable when applied to the nice, smiling gentlemen they see on their television sets.

Still, McCain got across his message on taxes.  Despite Obama’s repeated assertions that he would only screw over 1 of us in 20, almost no one believes him.  Then again, a majority think McCain, too, will raise their taxes.  The public is right on both counts.

McCain still retains the advantage on handling foreign policy crises.  Unfortunately for him, a majority trust his opponent, too.  More importantly, international affairs are not foremost on most people’s minds heading into the election. 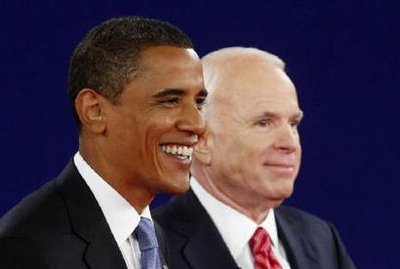