I just watched former President George H.W. Bush celebrate his 80th birthday with a parachute jump with the Army’s Golden Knights. It was his fifth jump, including an unplanned one from his disabled airplane in WWII, and he was awarded the Basic Parachutist Badge –with a bronze combat jump star attachment– after the jump. Fox News Washington Managing Editor Brit Hume and actor and martial arts expert Chuck Norris also jumped. 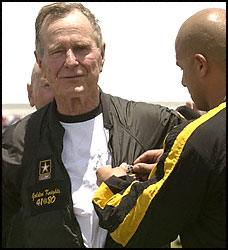 Former President Bush Jumps for 80th
The nation’s 41st president lands after a tandem jump in celebration of his birthday. (AP)

Former President George H.W. Bush celebrated his 80th birthday Sunday with a parachute jump from 13,000 feet over his presidential library.

He jumped in tandem with a member of an Army parachute team after officials decided the wind conditions and low clouds made it too dangerous for the 41st president to jump alone, a reprise of a stunt he made when he turned 75.

He waved as he approached a cheering crowd of about 4,000 people, including wife Barbara, his son, Florida Gov. Jeb Bush and former Soviet president Mikhail Gorbachev.

The jump capped two days of festivities. On Saturday, a baseball park full of about 5,200 people, including his eldest son, President Bush, former British Prime Minister John Major and celebrities and sports figures such as Dennis Miller and Pete Sampras, wished Bush a happy birthday.

When President Bush, and his wife, Laura, were introduced on Saturday, the audience loudly applauded and waved tiny American flags.

“I want to thank you for coming to wish our dad a happy birthday. Most of you are here because over the years you have come to know and love our dad,” President Bush told the crowd at Houston’s Minute Maid Park. “He has touched you because of his decency and warmth, his humility and humor. You know what we know. We are fortunate to have George Bush as a part of our lives.”