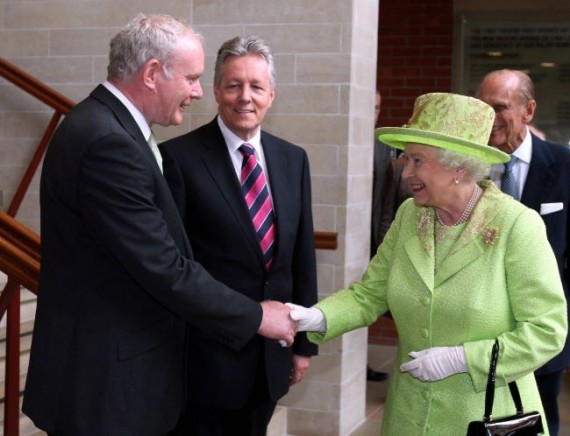 Twenty years ago, the idea of the Queen of England meeting with a Commander of the Irish Republican Army would’ve been unthinkable, but times do change:

BELFAST, Northern Ireland — In a moment of heady symbolism that would once have seemed unthinkable, Queen Elizabeth II, Britain’s head of state, shook hands on Wednesday with Martin McGuinness, a onetime commander of the Irish Republican Army opposed to everything she stands for.

The gesture represented a remarkable sign of reconciliation for both figures, since the queen is the titular head of Britain’s armed forces — the sworn enemy of the I.R.A. throughout the three decades of sectarian strife known as the Troubles. Her cousin, Lord Mountbatten, was killed in an I.R.A. attack on his yacht off the west coast of Ireland in 1979.

The handshake came 13 months after the Queen paid a groundbreaking visit to the Irish Republic designed to heal decades of hostility that have gradually given way to a less freighted relationship following joint British and Irish efforts to cement the 1997 cease-fire in Northern Ireland.

But after the queen arrived in Belfast on Tuesday, police fought running battles with youths throwing Molotov cocktails in the republican Broadway area of the city, recalling lingering hostilities between the mainly Protestant Unionists who seek closer ties to mainland Britain and the mainly Roman Catholic Republicans seeking a united Ireland. Nine officers suffered minor injuries, police officials said. The violence reflected continued divisions in a city carved into sectarian zones by barriers and so-called peace walls between neighborhoods.

“Far from being reconciled,” columnist Simon Jenkins wrote in The Guardian, “most of Belfast has merely been segregated.” Nonetheless, he wrote, “for a monarch to cross a divide is not to unite it, but it is better than not crossing at all.”

The queen is visiting Northern Ireland as part of her Diamond Jubilee celebration of 60 years on the throne. While she has no formal political power, her imprimatur on a process of reconciliation is seen as exerting a powerful influence across Ireland.

Since the cease-fire, Mr. McGuinness has built a political career and is now the deputy first minister in Northern Ireland’s provincial government.

Word of his encounter with the queen emerged last Friday when Sinn Fein, the political arm before the I.R.A. disbanded, said that its executive committee decided — not unanimously — to allow Mr. McGuinness to attend a charity event where the queen, her husband Prince Philip and President Michael D. Higgins of Ireland will be guests.

Mr. McGuinness had described the moment as a symbolic gesture of “stretching out the hand of peace and reconciliation to Queen Elizabeth who represents hundreds of thousands of unionists in the north,” according to The Press association news agency.

As the rioting in Belfast shows, the passions between the parties in Northern Ireland are still there and awaiting complete resolution, but the fact that even this meeting took place is remarkable considering that 33 years ago, the IRA had assassinated the uncle of Prince Philip.